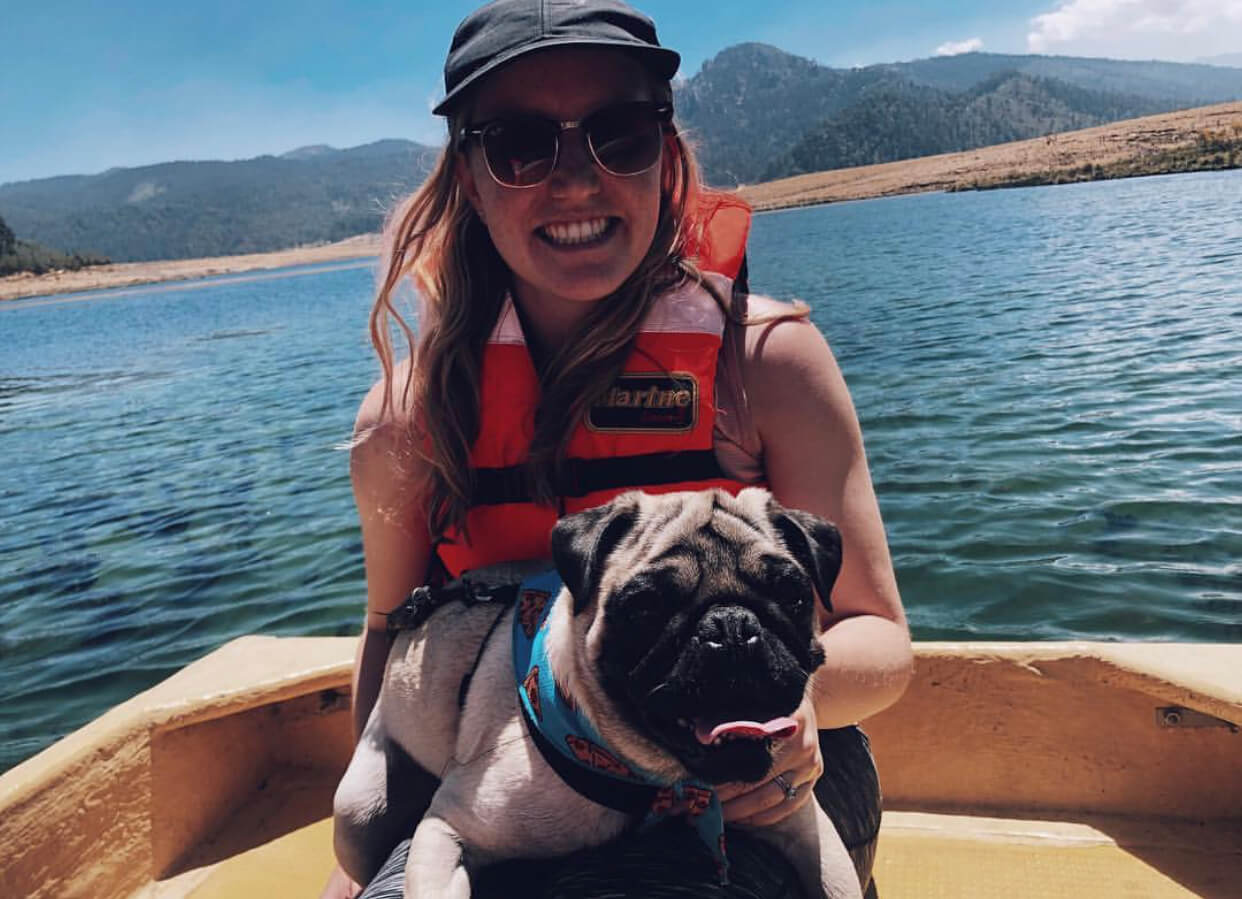 My name is April Vera-Lynn Thompson and I am so happy that you found my little corner of the World Wide Web! Here’s a little about me and this trusty travel blog.

How I Fell in Love With Traveling

I grew up in Kelowna, British Columbia, Canada. My family loved traveling. Both of my parents had amazing stories of their travels from before they got married, and from their honeymoon. My mom had moved to London, England to go to Bible College there when she was in her twenties and my dad had tons of stories from trekking through the Himalayas when he was younger too.

My parents instilled this love of travel into my sister and me by taking us to some incredible places. Every summer we would stay at Pioneer Pacific Camp on Thetis Island BC. Then, every Christmas we would go up to my grandparents’ cottage in Whistler, BC. We would regularly visit family in Vancouver and Victoria, BC plus every couple of years we would fly across the country to visit my dad’s side of the family in Ontario.

When my sister and I got a bit older, my parents took us on some international trips. We went to Seattle and a few other cities in the USA to go back to school shopping for a few years in a row. Then my parents took us to the Riveria Maya in Mexico. A few years later we went on the trip of a lifetime to Europe where we got to meet my grandpa’s brother’s family in Scotland, meet up with friends in Wales and England, wander around France and sunbathe in Greece. I will never forget any of the amazing trips we did while I was growing up. They helped make me who I am, broaden my perspectives and fall in love with travel.

Studying Abroad in Chile & the Beginning of Just Leaving Footprints

I studied Anthropology with a minor in Spanish at the University of British Columbia in Kelowna, BC. Since I was studying in my hometown to save money, I decided that during my fourth and final year of studies, I would do a semester abroad with a program called Go Global at my school. So, in 2014, I ended up in Santiago, Chile.

Living and studying in Chile was the first time that I felt like I was truly ‘out on my own’. I learned to trust myself, to take chances, to navigate a foreign city in a foreign language and I made tons of friends. I also ate amazing food, saw penguins in Patagonia, went sandboarding in the Atacama Desert, and even did a short trip to Mendoza, Argentina and to Machu Picchu, Peru!

When I first moved to Santiago, I decided to start this blog. This blog had a different name back then and I originally only started writing it to keep family and friends updated on my travels. As I continued traveling, my blog started to grow a lot more. I decided to start writing about my own travels in ways that could help people plan their own trips. Within a couple of years, I was starting to get a couple of thousand readers a month and Just Leaving Footprints has been going strong ever since.

Celebrating My Graduation in Thailand 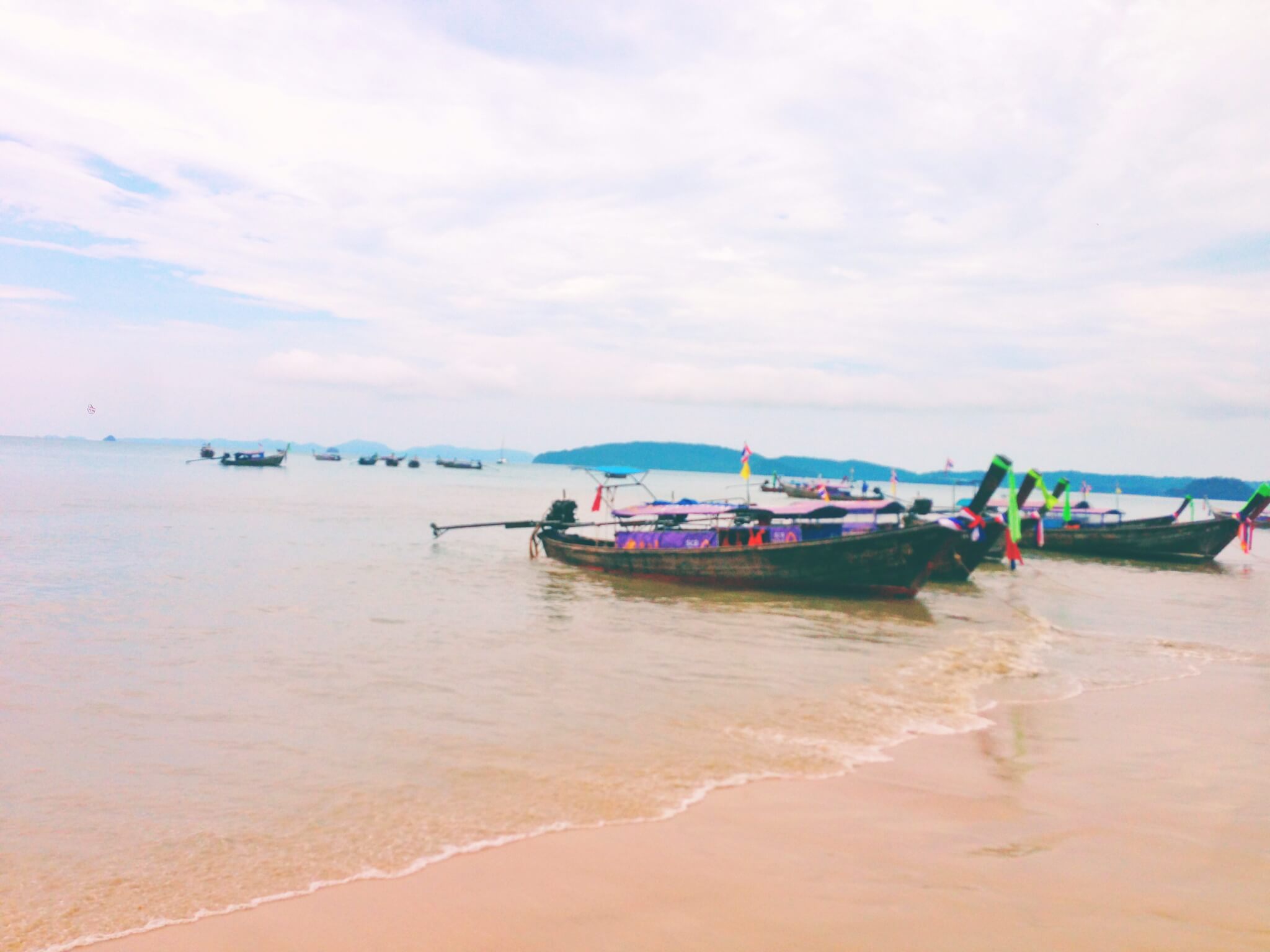 When I came home from Chile I just had one more full semester of courses and then one summer course to take before I could graduate. I was back in my hometown of Kelowna, BC and I desperately wanted to travel again. I spent my last semester and the summer saving up as much money as I could from working at a Honey Winery called Meadow Vista as well as from some other jobs I had.

Then, in November of 2015, I spent a month exploring Thailand with a friend of mine. Thailand was incredibly beautiful. I really enjoyed seeing the jungles and wildlife in the north, wandering through the chaos of Bangkok and island hopping in the south. Thailand is known as the ‘Land of Smiles’ for a very good reason.

Falling in Love & Moving to Mexico!

A few months before I had left for Thailand, I met this really amazing guy named Arturo. Arturo was studying at the same university as I was. He was an international student from Mexico and we had some friends in common. We ended up meeting at a church group on campus and started hanging out and talking a lot.

While I was in Thailand we texted constantly. I was already falling for him but I didn’t think anything would come from it because I had plans to move from Kelowna to Victoria, BC a few months after returning from Thailand.

However, when I came back we started dating right away and decided to try dating long distance. I’ll be honest, I was a bit skeptical about starting a relationship right before moving to a new city. The next year or so would consist of Arturo studying in Kelowna while I was working at a tea shop in Victoria. I loved island life and we visited each other constantly. In fact, that’s where the majority of our money went. Sometimes I would visit him along with my family in Kelowna, but more often, he would come visit me in Victoria or Vancouver.

Getting Engaged in Mexico City

After dating long distance for over a year we decided we wanted the distance part of our relationship to stop. It was 2017 and summer was fast approaching. Arturo and I ended up spending five months together in Mexico that year. And, while we were there, Arturo proposed to me in Chapultepec Park, Mexico City! My family flew down and we celebrated our engagement with both of our families together for about ten days! It was really magical.

That fall we went back to Kelowna so that Arturo could complete his last year of university. I moved back in with my parents for a bit to help save up money for our wedding and started working as a receptionist at an Organic Hair Salon.

Getting Married in Huatulco, Oaxaca

Then on June 16th of 2018 we got married! We had a small legal ceremony at my parents’ house on June 9th in Kelowna so that anyone who couldn’t make it down to Mexico could still come. Next, we hopped on a plane, spent a few days dropping off our stuff in Mexico City, and headed down to Huatulco, Oaxaca to get married.

Our wedding was so much fun! We had tons of family and friends from both sides come together and actually get to know one another on the white sandy beaches of Huatulco. Even though it poured rain during our ceremony and our photographer canceled at the last minute, it was still the best day of my life. Our reception was so crazy and filled with incredible food, hours of dancing, and tons of smiling faces.

Our next stop after Oaxaca was an incredible honeymoon in New York City. I had never been to NYC before and was so excited. Arturo and I packed a ton into our short time there. We walked around 14 kilometers per day, ate a ton of drool-worthy food, enjoyed street art and museums and even went to a comedy show!

After our honeymoon, we came back and settled into life on the outskirts of Mexico City. We have been living here for almost two years now and I have loved every minute of our time here. On December 26 of 2018, we adopted an abandoned pug and he quickly became our newest adventure buddy. His name is Mowgli. We have been able to take lots of day and weekend trips to tons of places here and we have lots more trips planned for 2020. 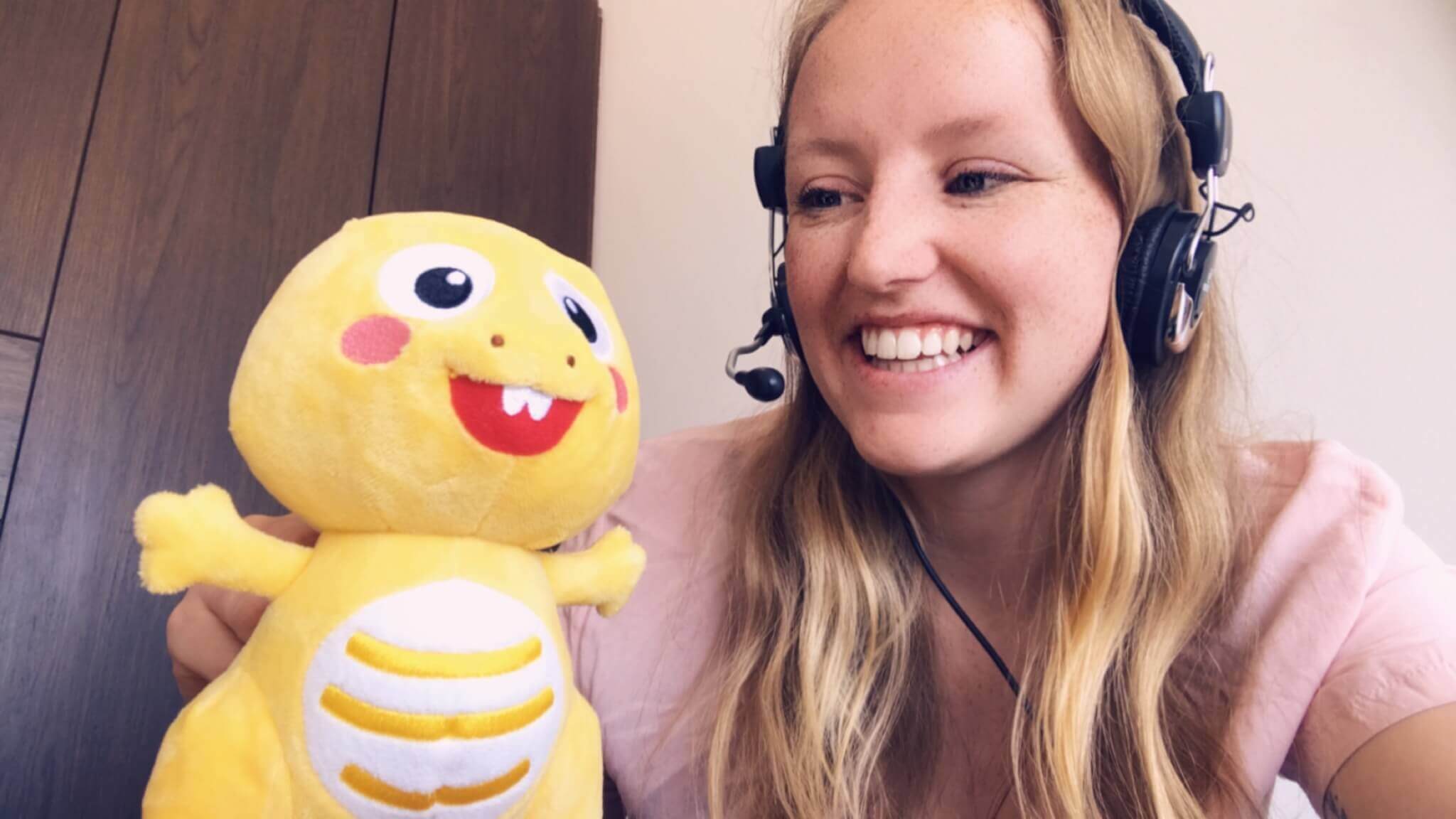 A few months after moving to Mexico, I landed my absolute dream job teaching ESL online to kids in China. Due to the time difference, I wake up really early to teach some amazing kids online. I also have the option to work nights, so sometimes I will work from 6 pm until midnight teaching too. I currently work for two companies. One is called VIPKid and the other one is SayABC and they’re actually sister companies.

Teaching ESL Online is incredible because it’s such a fun job. I get to teach amazing kids and I get paid quite well for it. Plus, I get to make my own schedule so traveling is super easy. I can choose to bring my work with me on my travels, or I can just block off my calendar to take time off.

Why does Just Leaving Footprints have a Sustainability Section?

So, now that I’ve explained a bit about my travels and how Just Leaving Footprints got started, I also want to take a moment to talk about the Sustainability section of the blog here.

After traveling for so long, I’ve seen first hand some of the devastating effects that humans have had on our planet. So, whenever I travel, I try to do so with as much respect and empathy for the environment and local communities that I visit. I’m fully vegetarian and I try to travel by land (car/train) when possible. It’s quite difficult to travel by land in the Americas because we don’t have a good train system like Europe does, and also because flights are often a lot cheaper than bussing. It depends where you are of course. Anyways when I do fly I try to offset my carbon as well.

I’m also very conscious of the amount of plastic that my husband and I use. We aren’t perfect and even though I’ve written about zero waste before and we recycle as much as we can, we still have a long way to go in order to reduce our plastic consumption.

As far as environmentalism goes, I am by no means perfect but I do try very hard to travel as lightly as possible on the planet. 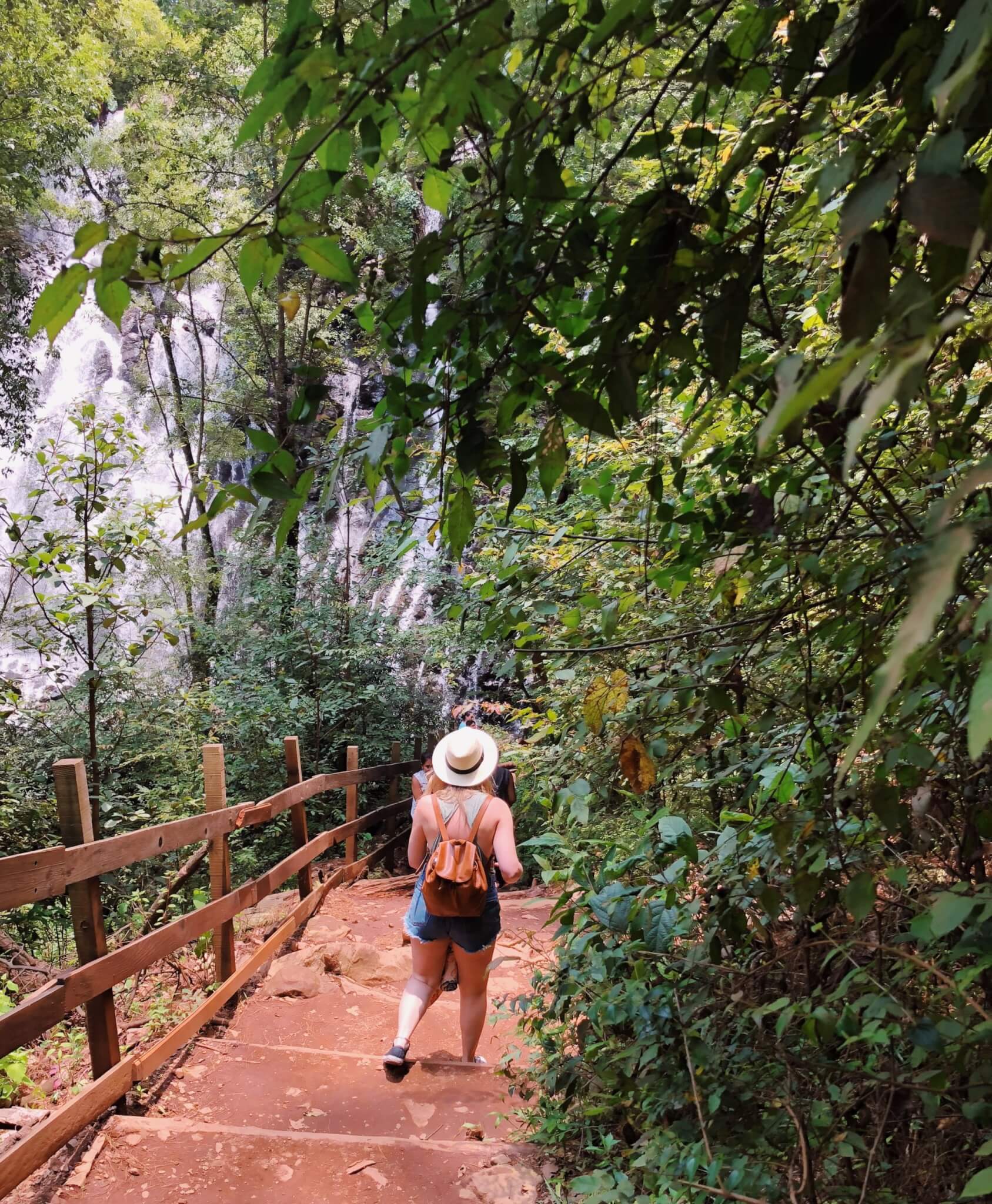 Arturo and I are planning to stay in Mexico City until August of 2020. Then our plan is to move to Montreal, Quebec in September! It’s going to be a big adventure because even though I’m Canadian, my family is from British Columbia and Ontario and I’ve actually only visited Montreal once. We want to move there because rent is affordable (by Canadian standards), Arturo has lots of job opportunities in his field there (he works with computer programming and data). We also just want to start a new adventure! Neither of us has explored much of Eastern Canada before and we want to learn French!

Thanks so much for reading the Just Leaving Footprints travel blog! My hope is that this website helps you plan future trips, prepare to study abroad, learn a new language and travel sustainably! I’m so excited that you’re here and I’m thrilled to be part of your adventures!