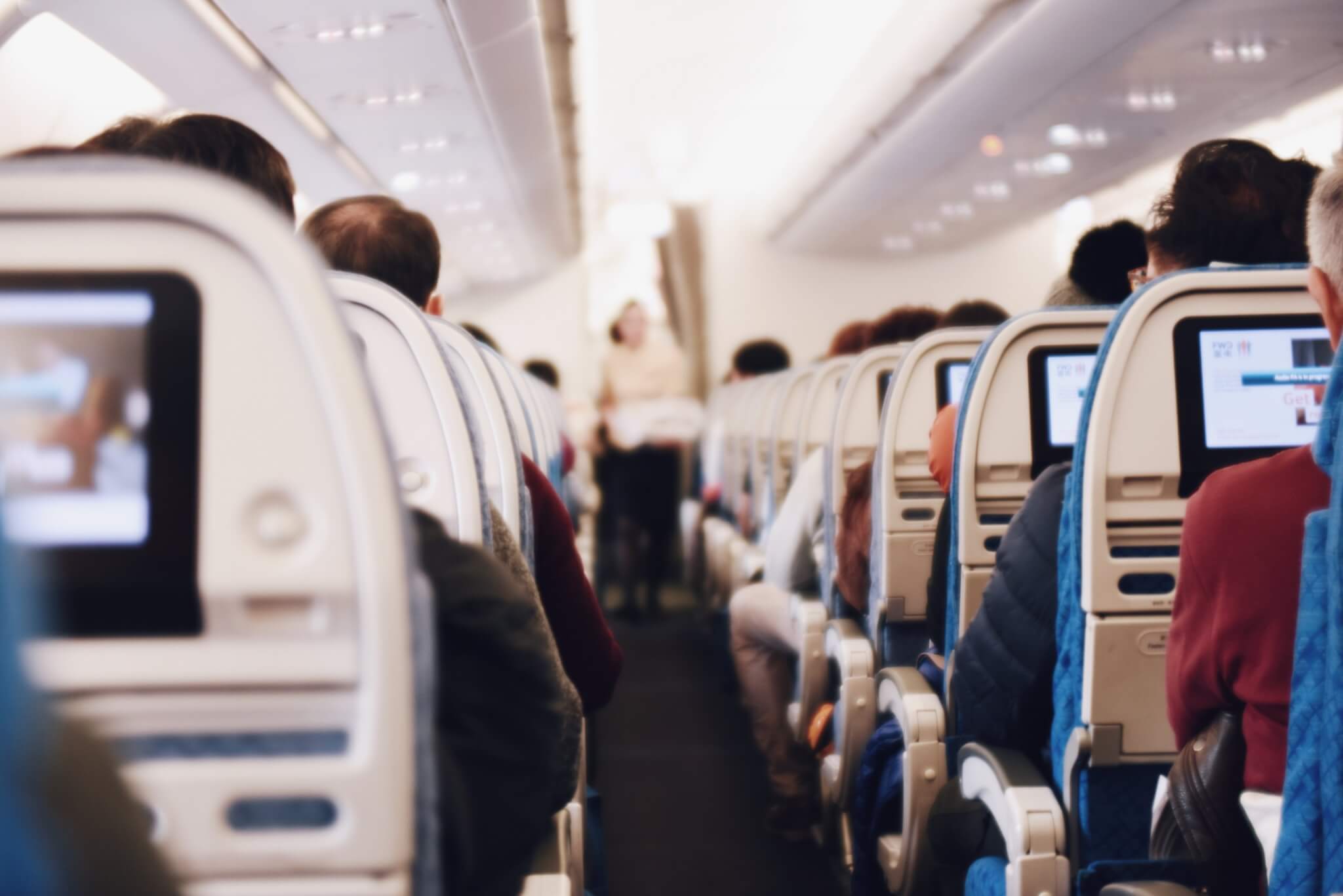 I’ve never been very wealthy. Until now I’ve only had jobs that paid minimum wage. Now I’m an Online ESL Teacher so even though I make more than minimum wage, I still don’t make tonnes of money. Yet I still manage to travel quite a lot. Traveling on a budget can be tricky if you’ve never done it before. There are often times where you have to make expenses that you didn’t foresee because sometimes things just don’t go according to plan. Usually, the biggest travel expense comes with purchasing flights, other modes of transportation and accommodation. So in this article, I’m going to show you how I’ve saved hundreds of dollars on travel by finding cheap flights and other kinds of affordable transportation.

How to Get Cheap Flights with Alerts from Secret Flying 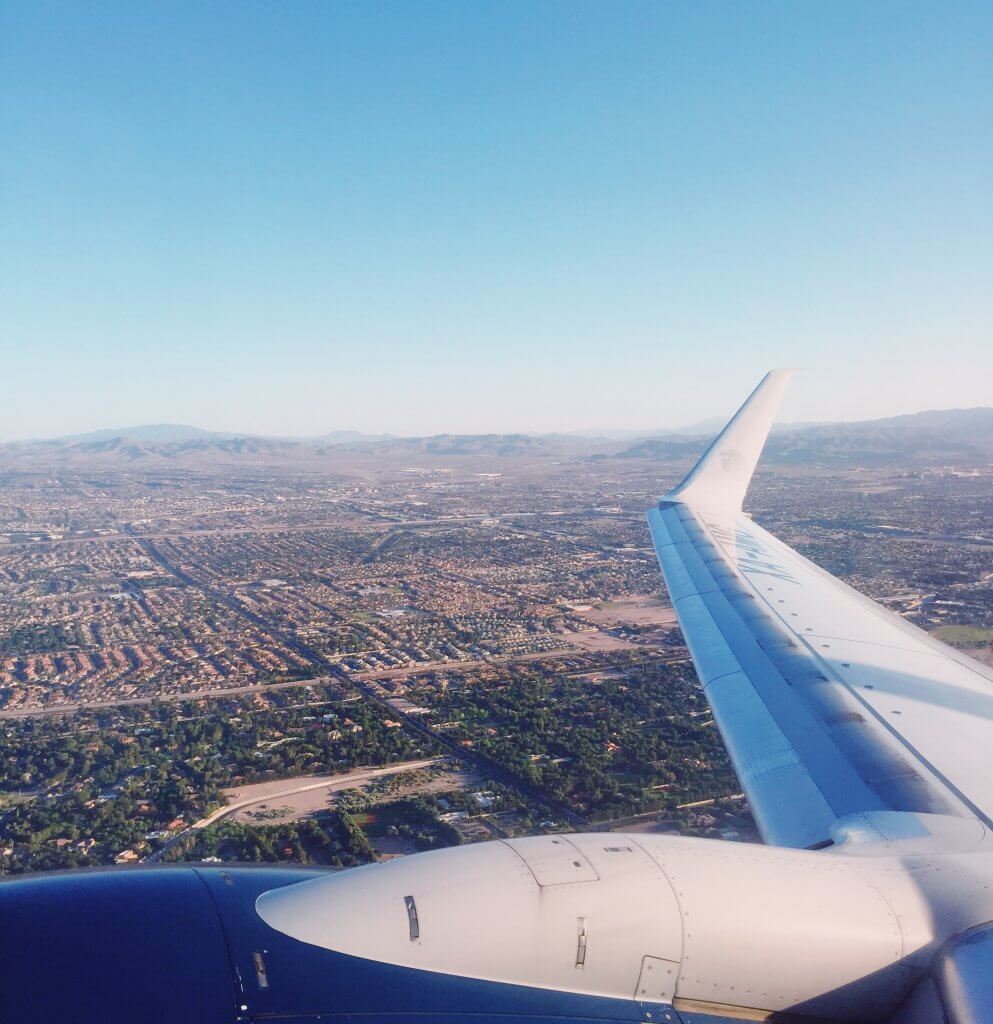 Next, set up your departure city. I’ll use Montreal as an example. Let’s say I live in Montreal (I’m actually moving there this fall) and so I set my departure city to be Montreal. I would highly suggest setting up multiple departure cities so that you have access to more cheap flights. For example, if I lived in Montreal, I would want to set up my departure cities as being Montreal, Quebec City and maybe even Toronto and New York because those cities aren’t super far away. That way if I get a flight alert for a super good deal from a nearby city, I can just drive or fly there and then get the really cheap flight to a farther away place.

One of the things that I was apprehensive about when I first found out about Secret Flying was that I didn’t know if the amazing deals would work for me. I thought you would have to be really flexible on travel dates. I’m so glad I was wrong. When you click on a deal through Secret Flying a screen will pop up showing you a huge list of travel dates that you can choose from. This is wonderful if you don’t have a flexible job or need to ask your boss for some time off.

Why Secret Flying is My Favorite Travel App

Secret Flying is amazing because it does the work for me. I don’t have to do a ton of research to find cheap flights or error fares (error fares – when an airline actually makes a mistake and drops the price way low by accident). This is because Secret Flying scans the internet for these deals automatically. All I have to do is wait and see what deals it finds for me.

How to Find Cheap Flights with Skyscanner

There are a few different features you can use to find incredible deals with Skyscanner. First, make sure you select your departure city, then for the destination, select ‘Everywhere’. Next, instead of selecting specific dates, select ‘Whole Month’ and then either choose the month that you want to travel or select ‘Cheapest Month’ to see the best deals. The deals you will see if you select ‘Cheapest Month’ will be the best travel deals for the entire year, flying out to everywhere and anywhere. Look at the pictures below to see how I did this using Mexico City as my departure city. 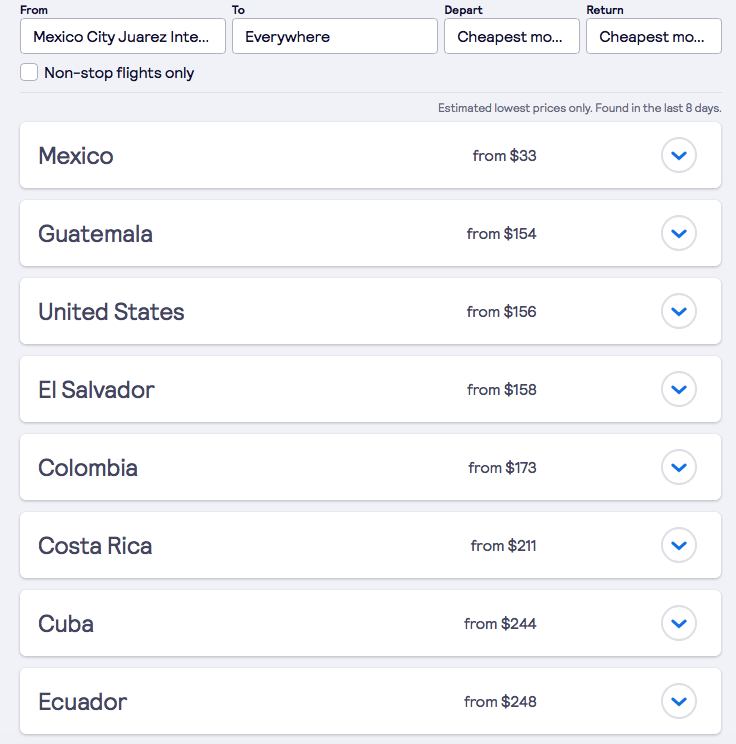 As you can see, by choosing ‘Everywhere’ as my destination with Skyscanner, and by selecting ‘Cheapest Month’, I was able to find some insane deals. Flying out of Mexico City, I could travel within Mexico for as little as $33USD, or even all the way to Ecuador for only $248USD. Let’s say I decided that I wanted to go to Colombia from Mexico City. As you can see I could fly to Bogota for as low as $173USD roundtrip. The only catch with using the ‘Cheapest Month’ feature is that once I clicked on the Bogota deal, it showed me that the cheapest month to fly there would be October. So if I had too many plans or I wasn’t able to get work off any time during October, I wouldn’t be able to go. However, it’s still a wonderful way to find cheap flights because you get to see so many options and find the cheapest flights out of the entire year! 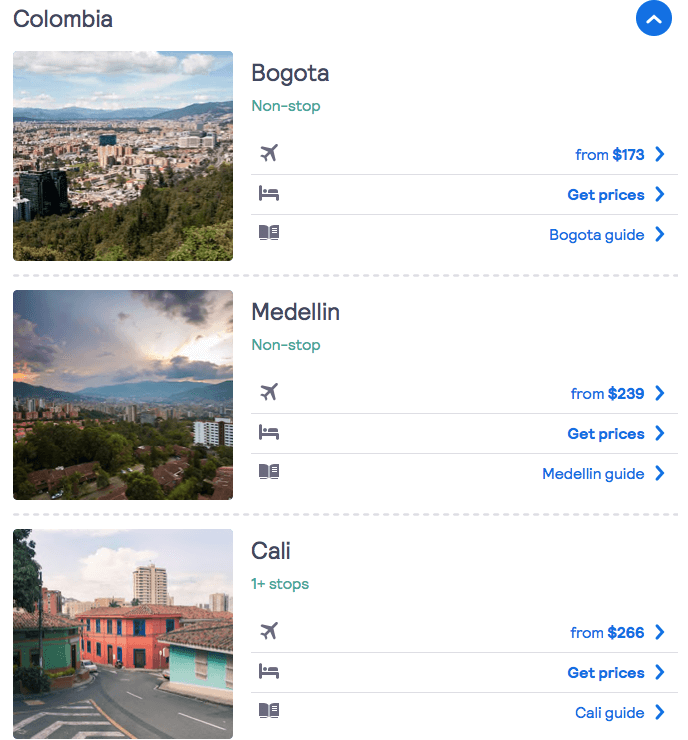 How to Find Cheap Flights with Google Flights

The other thing that I like about Google Flights is that even if I select a specific country or city as my destination, I can still see nearby destinations and their flight prices on the map. Look at the screenshot above. Even though I typed in Colombia as my destination, I can still zoom way out on the map and see how much it would cost for me to go somewhere else too. Remember that the prices in the above map are in Mexican pesos, so going to Chicago from Mexico City, is actually around $203USD.

Another way to find affordable transportation is by choosing to travel by bus instead of fly. In some places, flying can actually be cheaper than bussing. However, it is possible in many areas to find cheaper bus tickets. Plus, traveling by land is way better for the environment too. This is a great option if you aren’t traveling very far away. I don’t have any special hacks to finding the cheapest bus tickets within the different apps and websites I use. However, I do have a little list of my favorite bus websites and apps to use to find cheap bus tickets.

How to Find Cheap Train Tickets

Now, because I’ve only ever lived in Canada, Mexico, and Chile, I’ve never been near a very good train system. Europe is the place that has some of the best train systems in the world, and I’ve also heard good things about trains in parts of Asia. So, even though I haven’t traveled by train much, I did some research and found a few good websites for comparing train tickets and a helpful article all about finding cheap train tickets in Europe.

Save Money on Road Trips By Using a Ride-Sharing App

Ride-sharing apps allow people who are already going out on a road trip to open up space in their car to take a few extra people in exchange for some money. Often, these ride-sharing apps are great ways to travel because you can meet new people and save a ton on money that you would likely be spending on bus or train tickets. There are two ways that you can save money on road trips by using a ride-sharing app.

One way, which is perfect if you don’t have a car, is to look on a ride-sharing app to see if anyone else is already going to the place you want to go. Then you can pay a small fee (often less than bus or train costs) to catch a ride with them. Ride-sharing or carpooling apps are kind of like Uber in that you can rate your driver so that you know the driver you’re going with has a good rating and it’s safe to go with them.

Another way to use carpooling or ride-sharing apps is to open up your own vehicle to people who are also heading the same direction as you. It’s a great way to make some extra money and help pay for gas. It’s also great for the environment to rideshare. Here are some good ride-sharing and carpooling apps: 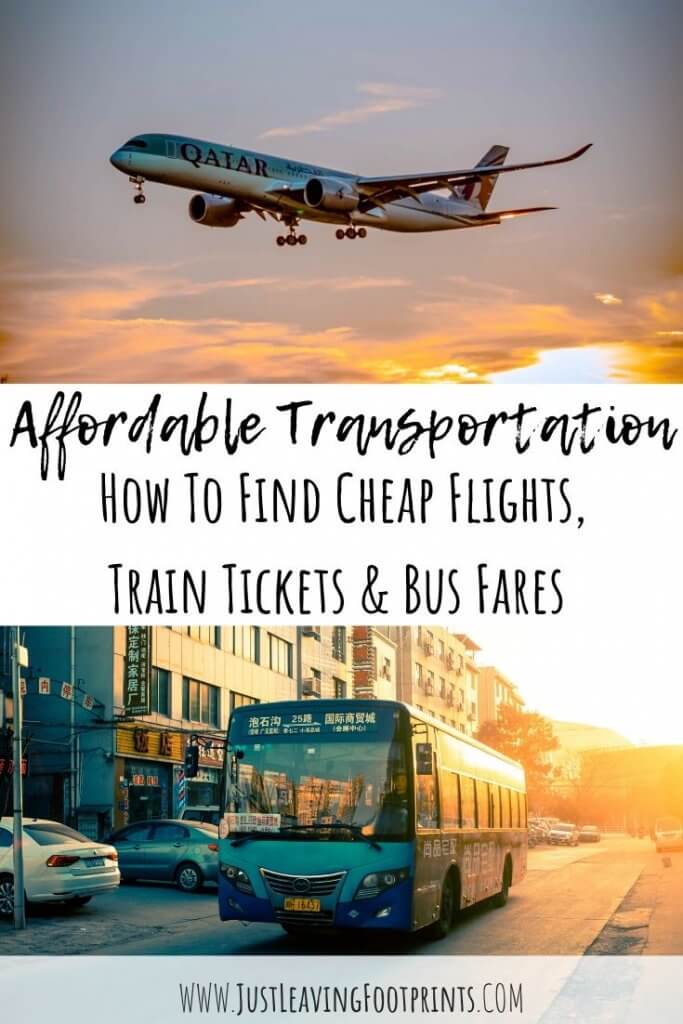 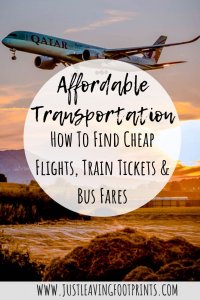 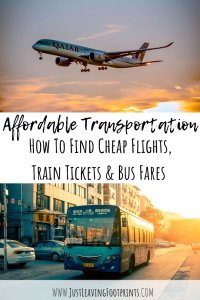 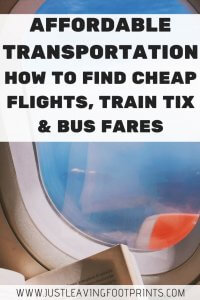