Christmas in Mexico City: The Best Things to Do 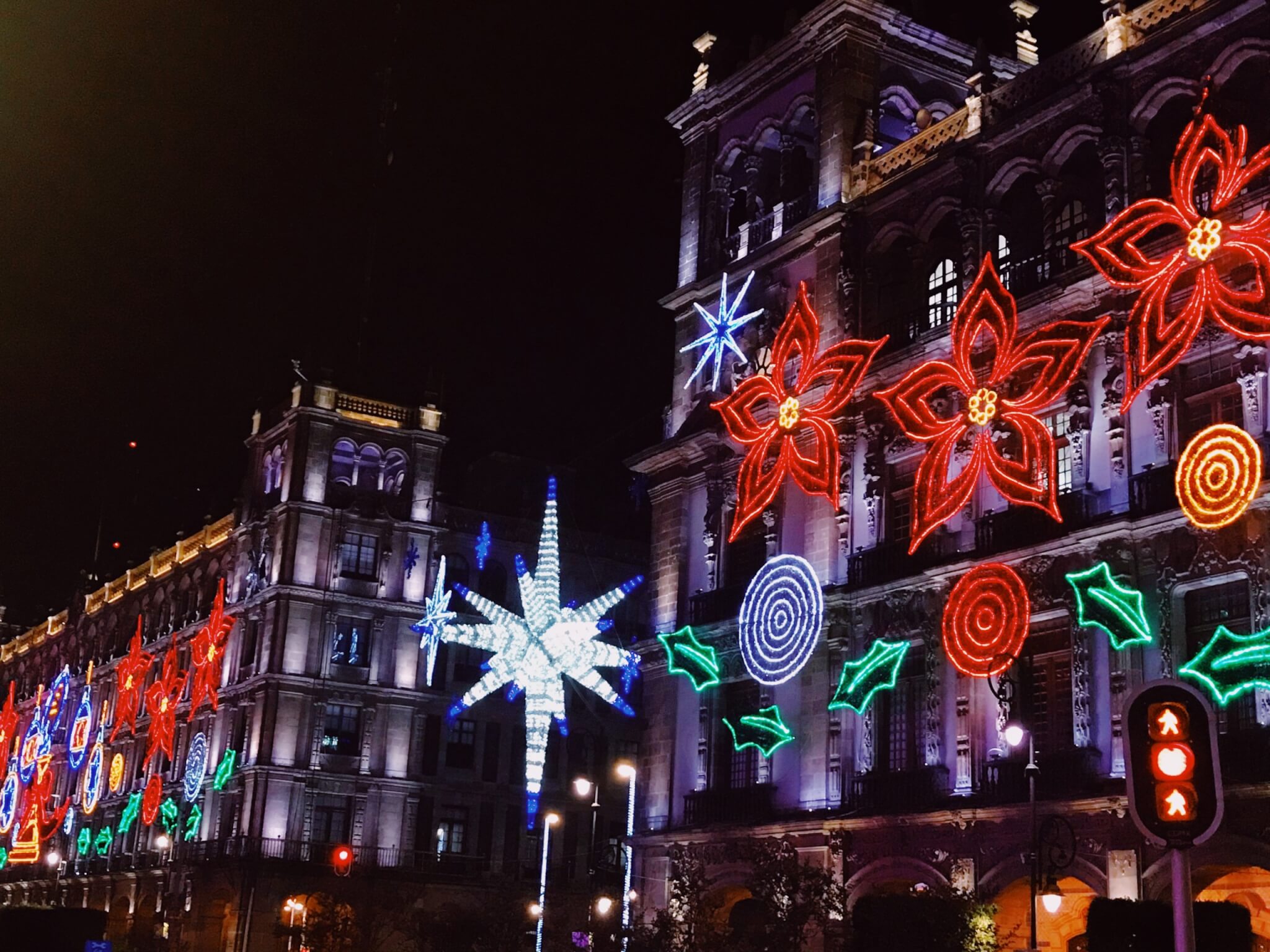 I have spent the last two Decembers in Mexico City and it’s truly a magical time to be in Mexico’s capital. There are plenty of bright lights to see in the evenings, warm chocolaty and fruity drinks to sip on, and so many other wonderful things to do. The capital goes all out for Christmas. There are decorations everywhere, lots of Christmas markets and just so much contagious holiday cheer filling up the city. Here are some of the best things to see and do during Christmas in Mexico City.

See the Lights in the Zocalo 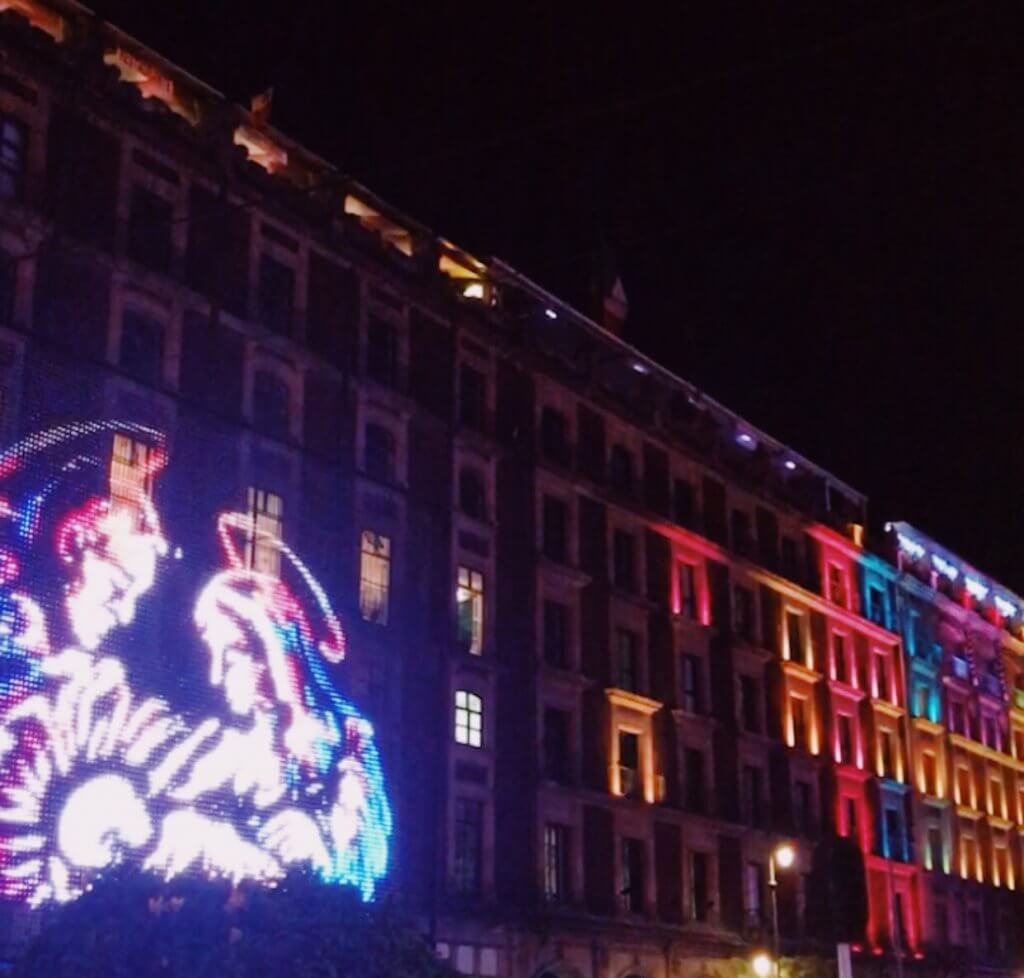 The Zocalo or City Center is one of the best places to see Christmas lights. The lights stay up for most of December and early January and they are really brilliant. When my husband and I went to see the lights, we also saw tons of street performers. There were people dressed up as the Grinch and other Christmas characters for children to take photos with. We actually went a little while after Christmas Day. Since it was nearing January 6, or the Day of the Wise Men, there were also people dressed as the Wise Men for children to take photos with too.

Christmas in Mexico City: Go Skating in the Zocalo

If you’re heading down to the Zocalo to see the Christmas lights, you might as well stay to go skating. Usually, the city sets up a large outdoor ice skating rink for people to enjoy. This past year however the city chose to set up the rink for roller skating/rollerblading instead of skating on ice. This is because it can be really hard to keep the ice rink cold enough for the ice not to melt during the heat of the day. The temperature in Mexico City only really drops in the mornings and evenings during the winter months. During the day it is often still quite hot.

Admire Christmas Piñatas and Buy Souvenirs at a Local Market

Mexico City has a ton of wonderful markets that switch to selling Christmas decorations, gifts and more during the holiday season. One of the things you will find in these markets are the famous Christmas  Piñatas. Piñatas actually started out as a Christmas tradition and it wasn’t until a bit later that the tradition of smashing a piñata became something to do at birthday parties as well.

Piñatas came to Mexico via the Spanish during the 16th century but the interesting thing is that the Aztecs already had a similar tradition. The Aztecs used to break clay pots to celebrate the birthday of the god Huitzilopochtli (the Aztec god of Sun and War). The clay pot would be decorated in feathers and when broken, the treats inside would fall in front of an idol. The piñatas that came with the Spanish and that were invented for Christmas are still used today and are in the shape of seven-pointed stars. Each of these points represents the seven deadly sins and when you break the piñata it is believed that you break away from all your sins from the past year. You can read more about the history behind piñatas here.

Some markets you should visit during the Christmas season to buy souvenirs and see piñatas are listed below: 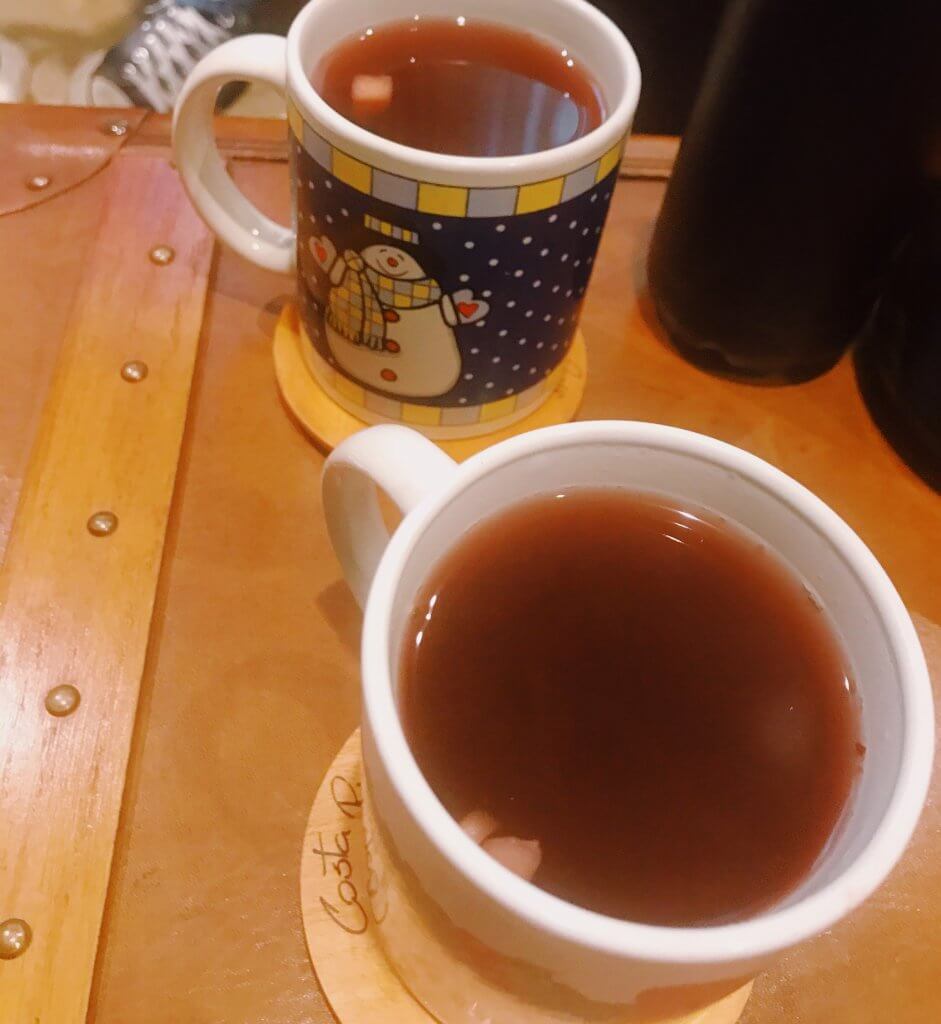 Ponche is a traditional Mexican drink served during Christmas time. It’s made with fresh fruits, hot water, sugar cane, cinnamon, and piloncillo. It’s kind of like hot apple cider except that alongside apples, there are often pears, tamarindo, guavas, raisins, and other fruits added. You can find delicious hot ponche at many local markets and cafes during the months of December and January and sometimes as early as November too. If you fall in love with ponche as much as I have, you can even use this recipe to make your own once you return home.

See the Nativity Scenes Set Up Along Reforma Ave

This is something that I really wanted to do but didn’t get a chance to. During December people set up tons of living nativity scenes all along Reforma Avenue. This is a famous street in Mexico City where the Angel of Independence is located. The middle of the street is also transformed into a sea of bright red poinsettia flowers or ‘Noche Buenas’ for visitors to enjoy.

Attend a Special Showing at the Folklore Ballet 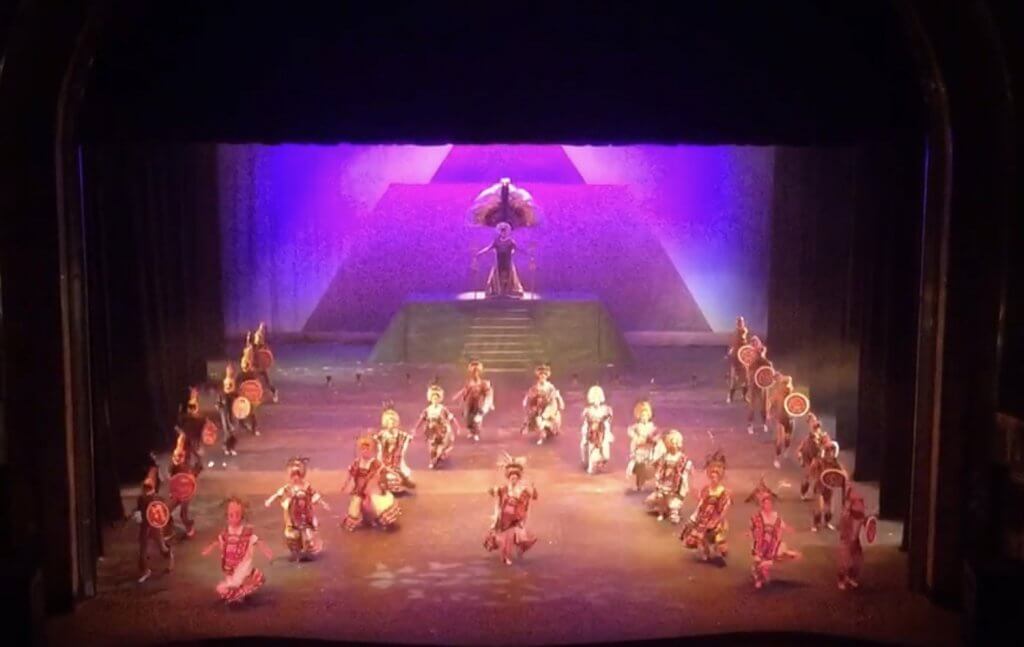 The Folklore Ballet is one of my favorite things to see in Mexico City. Some of my husband’s uncles actually perform there as mariachis. You get to enjoy wonderful live music along with traditional Mexican dances from all over the country. The Folklore Ballet is held in the Palacio de Bellas Artes on Wednesday and Sunday evenings and during December you can see a special Christmas variation of the popular show. You can find showtimes and tickets here.

Admire or Buy Nochebuenas in Xochimilco 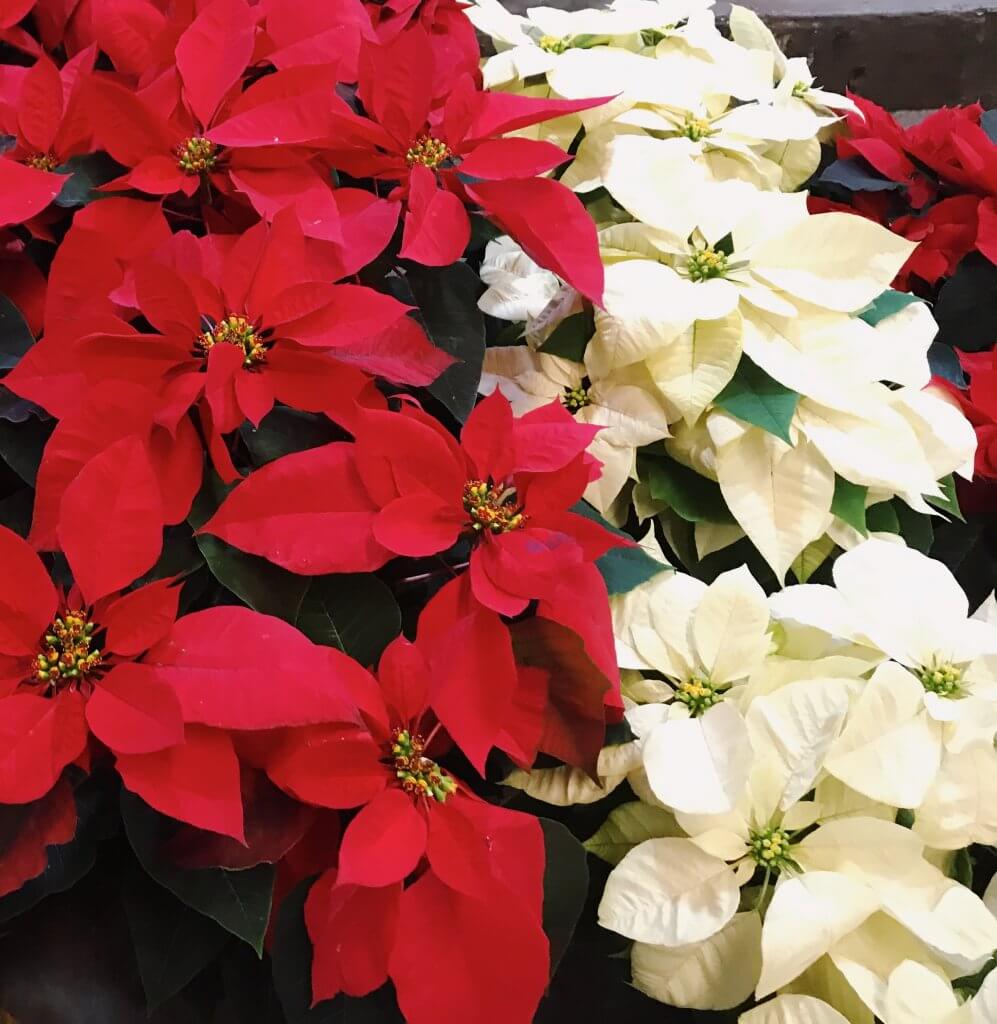 Xochimilco is a beautiful area of Mexico City made famous for its trajineras (colorful boats) that you can ride along some beautiful canals surrounded by man-made islands and gardens. There is also the Xochimilco Market there where you can admire or buy Noche Buenas (poinsettias). These flowers are extremely popular during Christmas in Mexico City. You can also check out this article for other places to buy poinsettias in Mexico City. 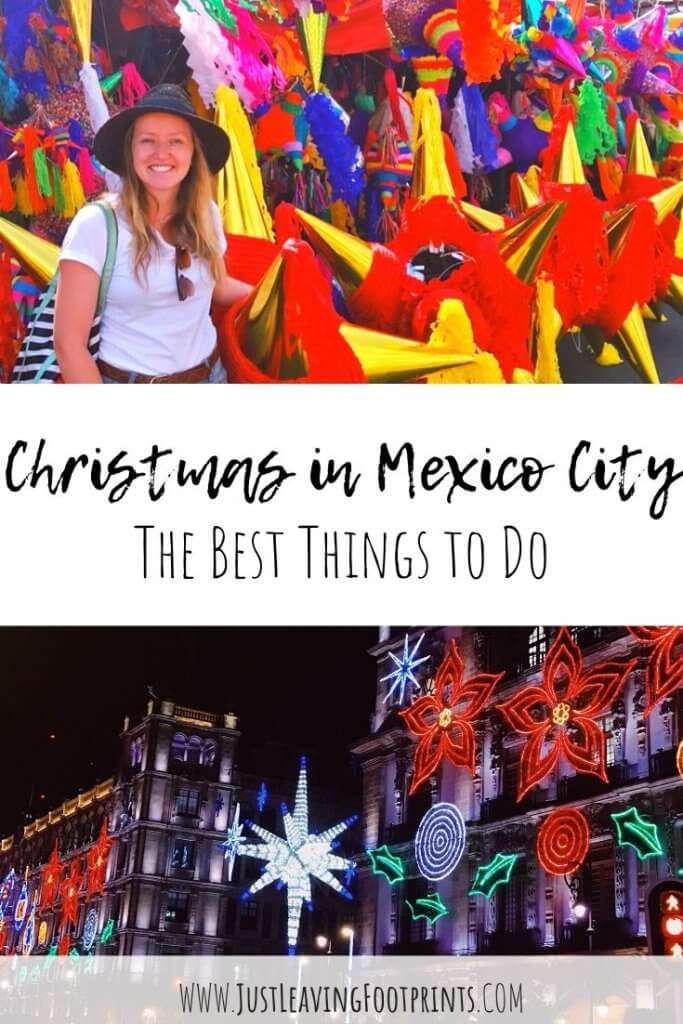 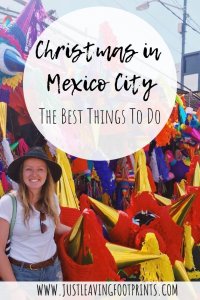 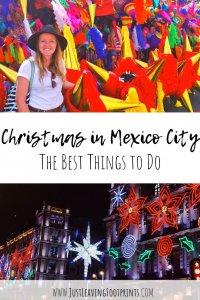 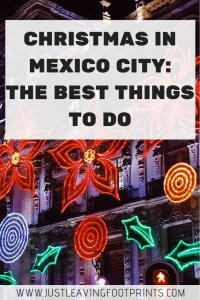