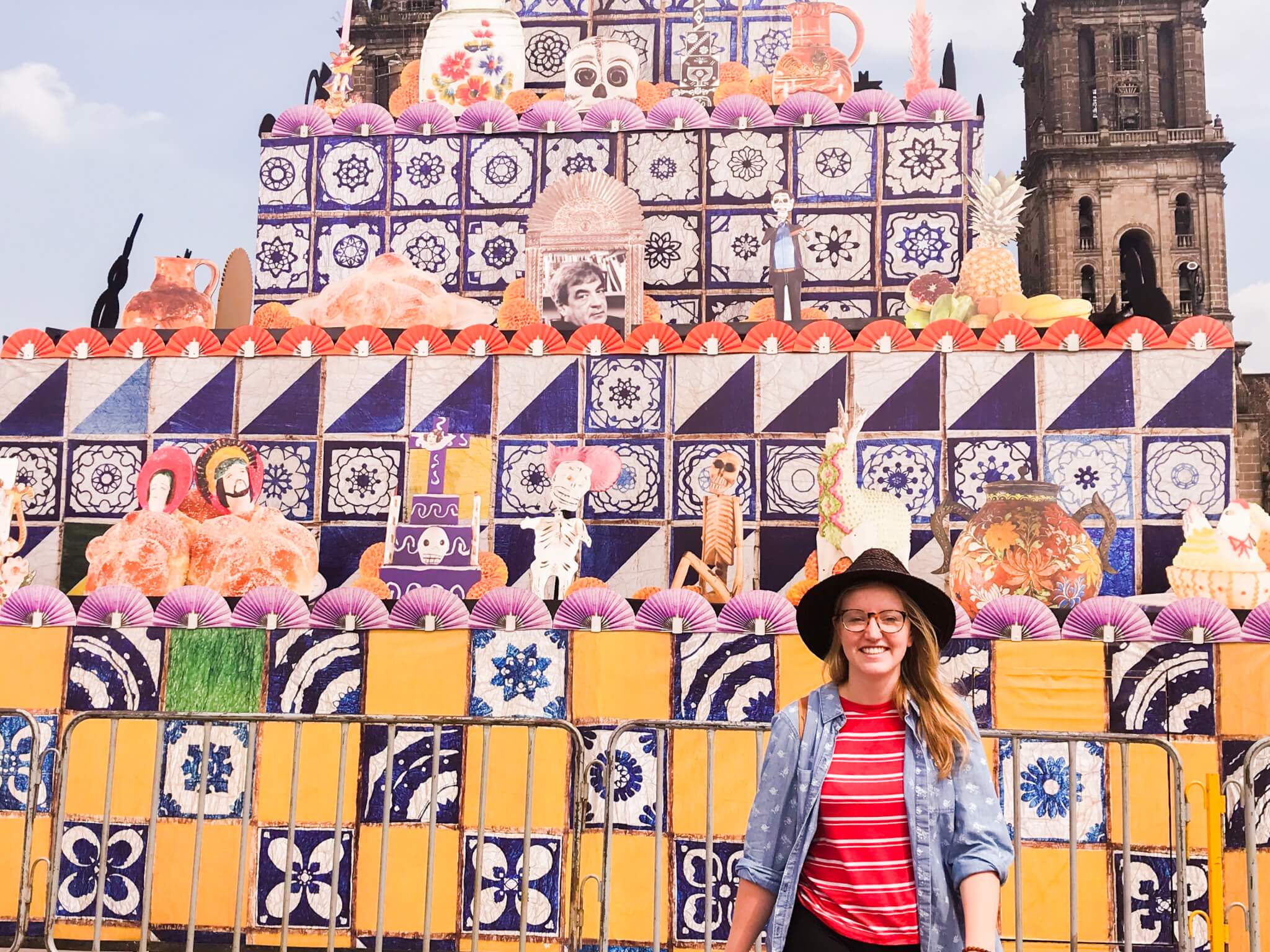 This year I celebrated Día de Muertos in Mexico for the very first time since moving here. It was an incredible experience and tons of fun. We celebrated Day of the Dead in both Mexico City and Guanajuato City and had an excellent time. I feel extremely grateful that my husband, Arturo, was able to teach me so much about this Mexican holiday. Here’s what I learned celebrating Día de Muertos in Mexico.

Día de Muertos is More than a One Day Celebration

Before meeting Arturo and moving to Mexico, I didn’t know a lot about Día de Muertos. I knew that many families set up alters but I didn’t know how they were set up or the significance behind them. An ‘ofrenda’ is an alter that families set up in their homes to honor their deceased family members. An ofrenda is usually quite colorful, and is filled with photographs of the family members who have passed away. People put out flowers, bread, drinks, food and more as offerings to their families at these alters. While ofrendas are most commonly kept in people’s homes, you can also find ones out on public display. We saw two huge ofrendas in Mexico City’s City Centre as well as more at various restaurants and markets.

‘Pan de Muerto’ is a type of sweet bread that is typically eaten and enjoyed during Day of the Dead. It’s very popular during October and November and literally means ‘bread of death’. This type of bread is often shaped in a circle with ‘bones’ made of more dough criss crossed on top of it. People also place Pan de Muerto at ofrendas as a gift to the deceased.

We were walking through a few markets when my husband, Arturo, pointed out some beautifully decorated sugar skulls. Growing up and only hearing about Día de Muertos, I used to think people just ate these during this time of year, and I didn’t know what the significance behind them was. Arturo explained to me that you don’t actually buy sugar skulls to eat them. The two reasons why someone in Mexico might purchase a sugar skull is either to put it on an ofrenda to honor the deceased, or to give to a friend to remind them that death is the only certainty in life. When you buy a sugar skull, the person’s name is typically written in icing on the forehead of the skull, making it a symbol of that person’s life.

The Significance Behind Mexican Marigolds 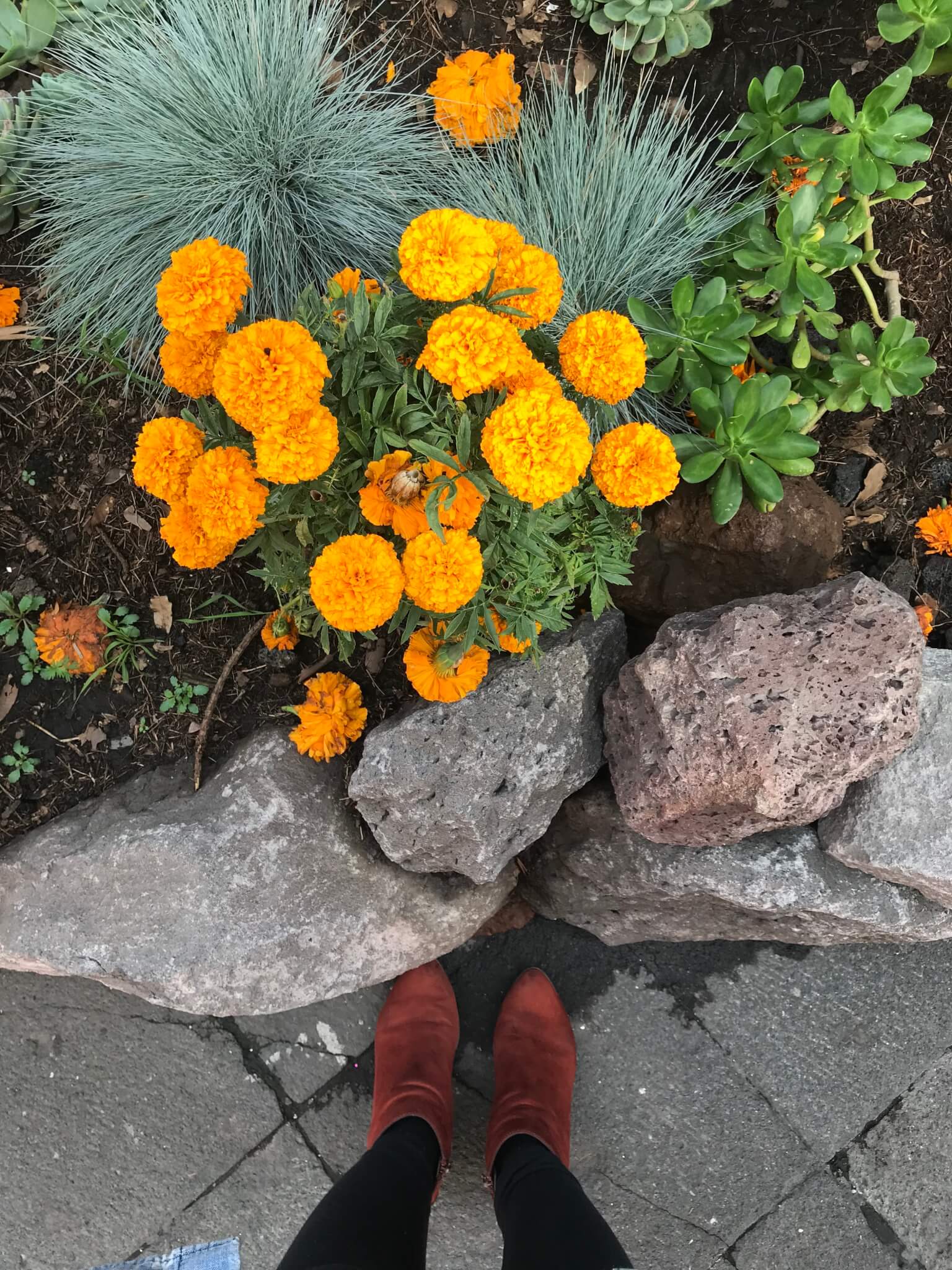 Cempazuchitl, or Mexican Marigolds are beautiful bright orange flowers often seen during Día de Muertos. These flowers have Mesoamerican roots and have become yet another way to honor the dead during this time of year. We saw tons of these flowers planted all the way along some of Mexico City’s most famous streets. Typically they are set up at ofrendas and are also laid by tomb stones at cemeteries. One of the reasons that these marigolds are used during Día de Muertos in Mexico is that they are believed to help guide deceased family members and ancestors to their family ofrendas.

Enjoying the Art of Tapetes

I had no idea what a ‘tapete’ even was until we went to Guanajuato City to celebrate Day of the Dead on November 2. A ‘tapete’ is basically a tapestry. However, this type of tapestry is laid out on the ground and is made with a unique array of materials. These materials include dry black beans, chiles, corn husks, flowers, leaves and more. While we were in Guanajuato City, we walked along one of the main roads and literally saw hundreds of beautiful hand-made tapetes all over the street. Hundreds of tourists and locals alike were appreciating them, snapping photos and trying not to step on them despite the crowds. I could have easily spent our entire day just walking along that road looking at the beautiful artwork of the tapetes.

Even if you’ve never celebrated Día de los Muertos before, chances are you have seen pictures of the famous Catrina. ‘La Calavera Catrina’ is a painting that Jose Guadalupe Posada created in 1910. The painting is of a female skeleton wearing a large and extravagant hat. It’s one of the most famous Day of the Dead symbols out there but most people don’t know the history behind it.

Jose Guadalupe Posada lived and created his famous work of art during the Porfirio Díaz dictatorship. During this time, wealth was being spread unevenly throughout Mexico. The rich were getting richer and the poor were angry. Many of the elite and wealthy people in Mexico were also getting obsessed with trying to become more ‘European’. This is why ‘La Calavera Catrina’ wears a fancy French hat. She is the symbolic reminder that no matter how wealthy someone gets, everyone ends up dead in the end. In fact, Posada’s original name for the painting was ‘La Calavera Garbancera’ which referred to Mexicans who wished to pass as European and despised their own culture. Posada’s work helped to spread the hatred against Porfirio Díaz and played an important symbolic role during the Mexican Revolution. You can read more about the history of La Catrina here.

What I Learned Celebrating Day of the Dead: What Happens at Cemeteries?

We didn’t visit any cemeteries during Día de Muertos but I asked Arturo what usually happens at them during this holiday. He told me that people often go to visit the graves of deceased loved ones. They bring flowers and gifts and have picnics by the graves. Some people even sleep over in the cemetery next to the graves. Apparently there are tours that you can go on where you will be able to sleep over at Mexican cemeteries. Personally, I don’t think this is such a good idea as I don’t see how a tourist sleeping over by a strangers’ grave could be respectful. However, I have also heard of tours where you can visit cemeteries and simply observe all the flowers laid out, or attend twilight vigils.

We didn’t go to the Mexico City Day of the Dead parade while we were celebrating. However, I did manage to learn a bit about it from Arturo. He told me that the Mexico City Día de los Muertos Parade is actually a relatively new thing. There never used to be a parade until the James Bond movie, Spectre, came out in 2015. In the introductory scene of this movie, James Bond is seen walking through a Day of the Dead Parade in Mexico City. After the movie came out, Mexico City decided to start putting on a Día de Muertos Parade for tourism purposes. Some people were not too pleased with this and there’s been controversy around the event mainly for it being inauthentic and not the typical way families in Mexico actually celebrate.

The Significance of Xoloitzcuintli Dogs During Day of the Dead

If you’ve seen the movie Coco, you may know a few things about this already. Xoloitzcuintli dogs are a hairless breed native to Mexico. They are believed to act as spirit guides to their owners and help their owners reach the underworld after death. Dante, the dog in Pixar’s Coco, is a Xoloitzcuintli dog. Xolos have been very popular pets in Mexico for a long time. Even Frida Kahlo and Diego Rivera used to have Xolo dogs. If you want to see real Xoloitzcuintli Dogs on your next trip to Mexico, you can see them at the Dolores Olmeda Museum in Mexico City, near the trajineras of Xochimilco. 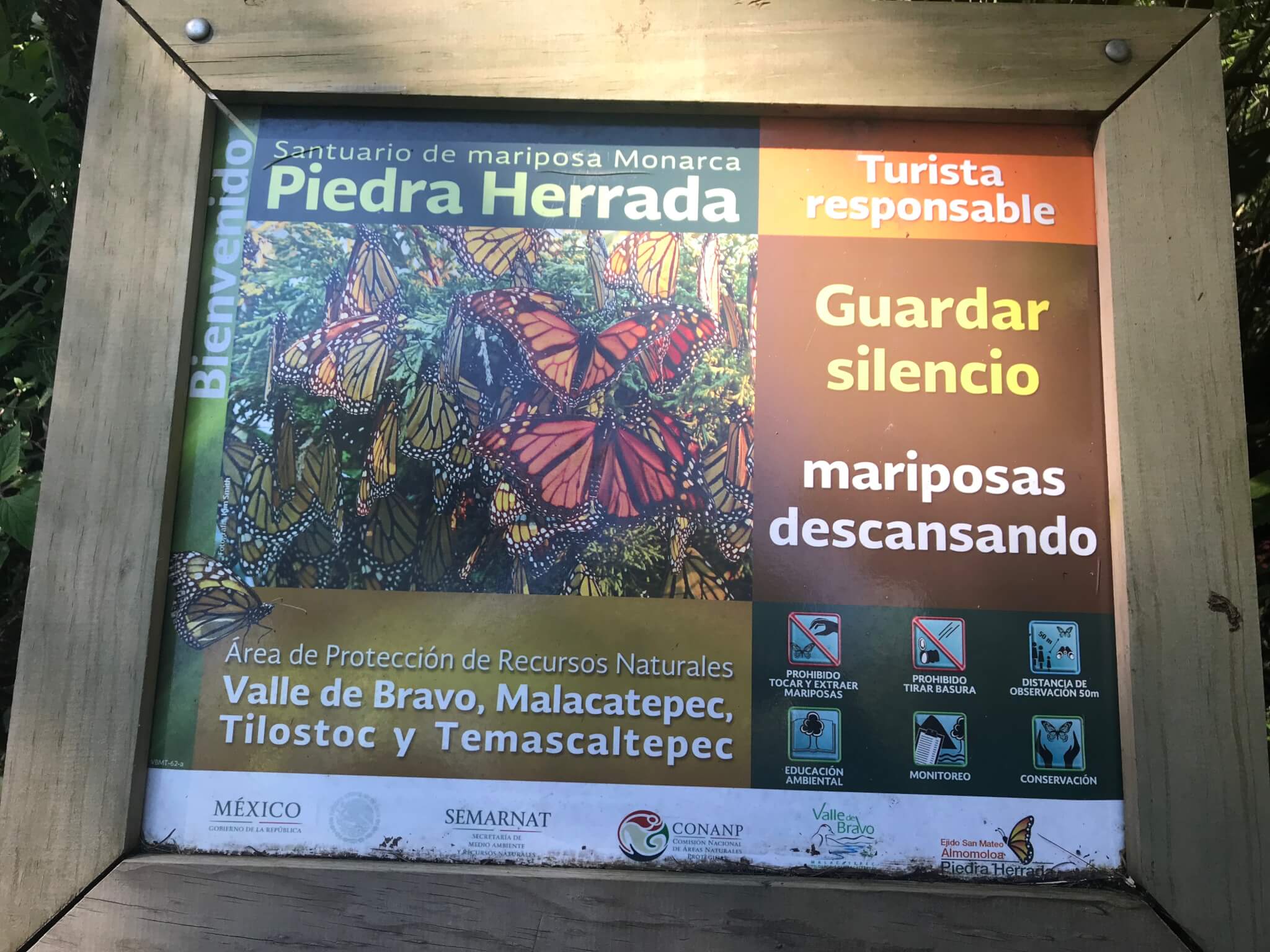 If you haven’t heard of it before, the Mexican Monarch Butterfly Migration is a huge deal. It’s when Monarch butterflies in Canada migrate down to spend their winter in Mexico. We went to see the beginning of the Monarch Butterfly Migration in Valle de Bravo the other day. It was incredible. There’s not a ton of butterflies there yet because it’s still November. Apparently the best time to see them is in the beginning of February during mating season. Still, there were hundreds of butterflies near the top of the mountain we hiked, all flying about or huddling up in big bunches to keep warm.

Anyways, during our hike up the mountain, our guide Vincente, explained to us that how the migration relates to Day of the Dead. Apparently, the first day that the butterflies begin arriving is on November 1 which is the start of Día de los Muertos. For this reason, many people believe that the Monarch butterflies are the souls of their ancestors coming to visit. Due to this, if you find a dead butterfly or a broken wing in the forest you must leave it where it is or put it back on the forest floor when you’re done looking at it. This is because the next generation of Monarchs that migrate need to see where their ancestors have been so they can return to the same place.

Celebrating Life and Honoring the Dead

As much as Day of the Dead is of course a way to honor the dead, it is also a means to celebrate and be thankful for life. The reason bright colors are often used in decor is because death is not seen as the end of life, but rather as the beginning of an after life. When people honor their deceased by placing their photos on ofrendas and sharing their stories, they are remembering the wonderful lives they lived. When you receive a sugar skull with your name on it from a friend, it’s a reminder that death is the only certain thing in life. It’s a reminder to live your life to the fullest.

I think the Mexican tradition of celebrating Day of the Dead also helps people come to terms with their grief. It allows for extra space to process the loss of loved ones. It helps as well as to appreciate the ways their lives have been impacted by those they have lost. Above everything, Day of the Dead is a celebration and it’s an extremely love-filled time of year in Mexico. 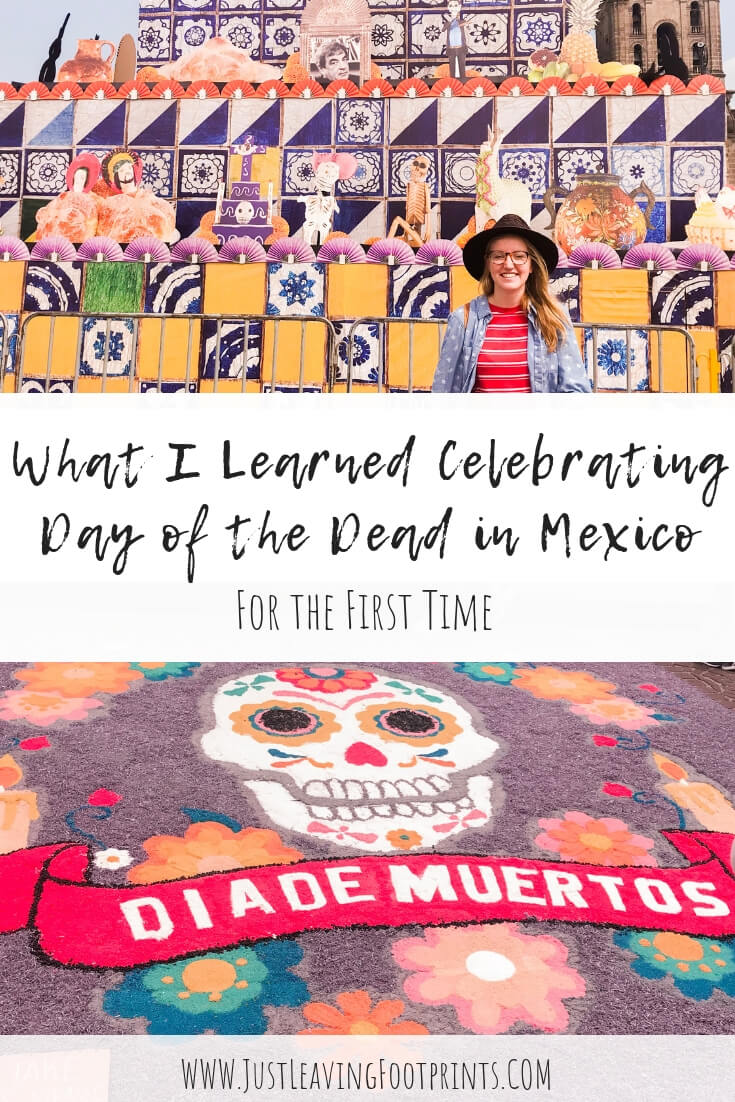 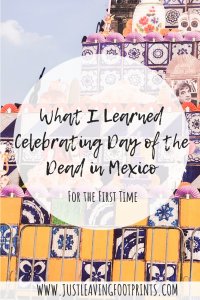 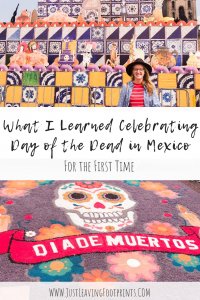 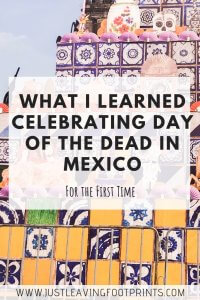 Author: April Thompson
Filed Under: Mexico
How to Order Vegetarian and Vegan Food in Spanish & Explain Other Dietary Restrictions
Where to Stay in Guanajuato: Hotel Abadia Tradicional Review