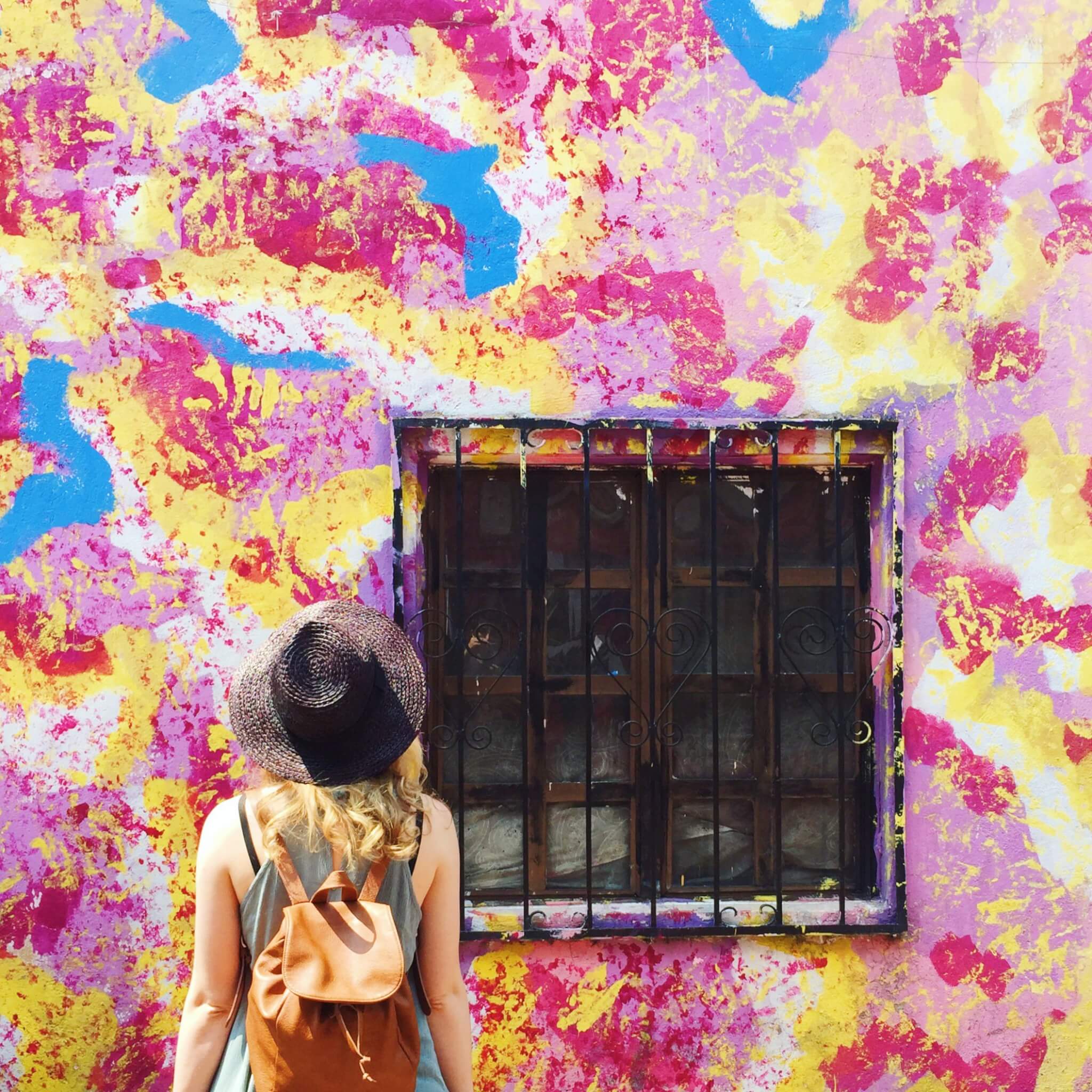 I’m so excited to say that I am back in Mexico City spending time with my boyfriend, Arturo, and his family again. Last week Arturo took me to explore La Romita. It’s a very small neighborhood quietly nestled inside La Roma – a larger and super hip area located in Mexico City. I asked him to take me there because it is known for its street art. I absolutely love exploring and finding places full of urban art. Did you know that some anthropologists spend their entire careers studying street art and graffiti? So cool! I might need to find a job like that. If you ever pay a visit you will definitely need to check out La Romita for Mexico City Street Art.

UPDATE: Since writing this post the artist of the featured photo and the photo used for posting this blog post on Pinterest has contacted me! So cool! Anyways the name of the wall in the featured photo is the Mural Charromita and it was painted by Felipe Reissenweber Menéndez. If you would like to see more of Felipe’s art please visit his Facebook Page here.

A post shared by APRIL🌎JUSTLEAVINGFOOTPRINTS (@aprilveralynn) on Apr 17, 2019 at 2:30pm PDT

“Romita My Love; This site used to be a neighborhood of Tenochtitlán called Atzacoalco (place of herons), Colonia Roma was founded in 1902. Afterwards it became known as Santa María Aztacoalco. It was near the old Chapultepec path on an islet surrounded by canals. Its big trees and the road that was built along with the chapel brought back to mind a place in Rome, Italy, according to town hall’s documents, so it was called “Romita”. In the novel, “Las Batallas en El Desierto” by José Emilio Pacheco it reads: “Romita was a town set apart. Here the man of the sack lurks, the great “robachicos” (kidnapper) […] By day he’s a beggar, by night a millionaire thanks to the exploitation of his victims.”
In 1944 the church of La Romita was declared a monument and the area named a characteristic place, and in 1980 both became recognized as cultural monuments of Mexico City.
Also in this place, one of the greatest cinematographic works shot in Mexico was filmed: “Los Olvidados” by Luis Buñuel. Fall in love with Romita!!”

How to See the Street Art in La Romita: Explore by Yourself 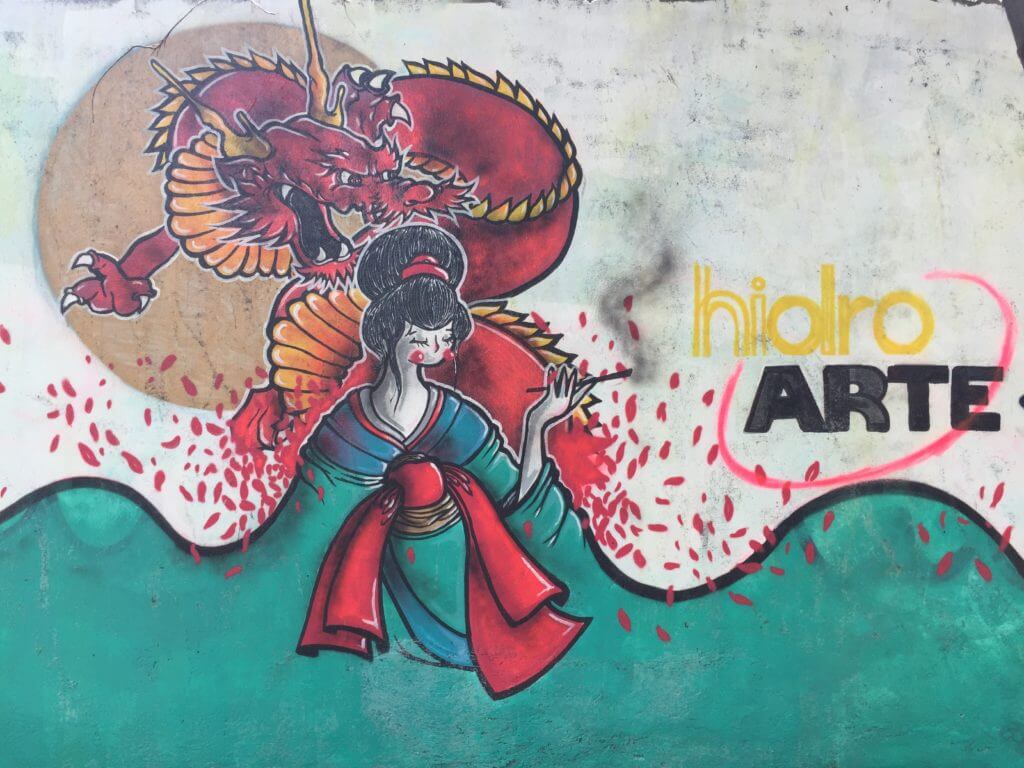 If you are heading to Mexico City and you love street art make sure you don’t miss out on La Romita. It is really easy to explore the area yourself and find hidden pieces of art. Just keep in mind that the street art scene in La Romita is constantly changing. There may be photos in this blog post of art that you won’t be able to find, simply because it has been covered up. Regardless, even if you don’t find as many murals as you were expecting, the buildings are still very bright and colorful. 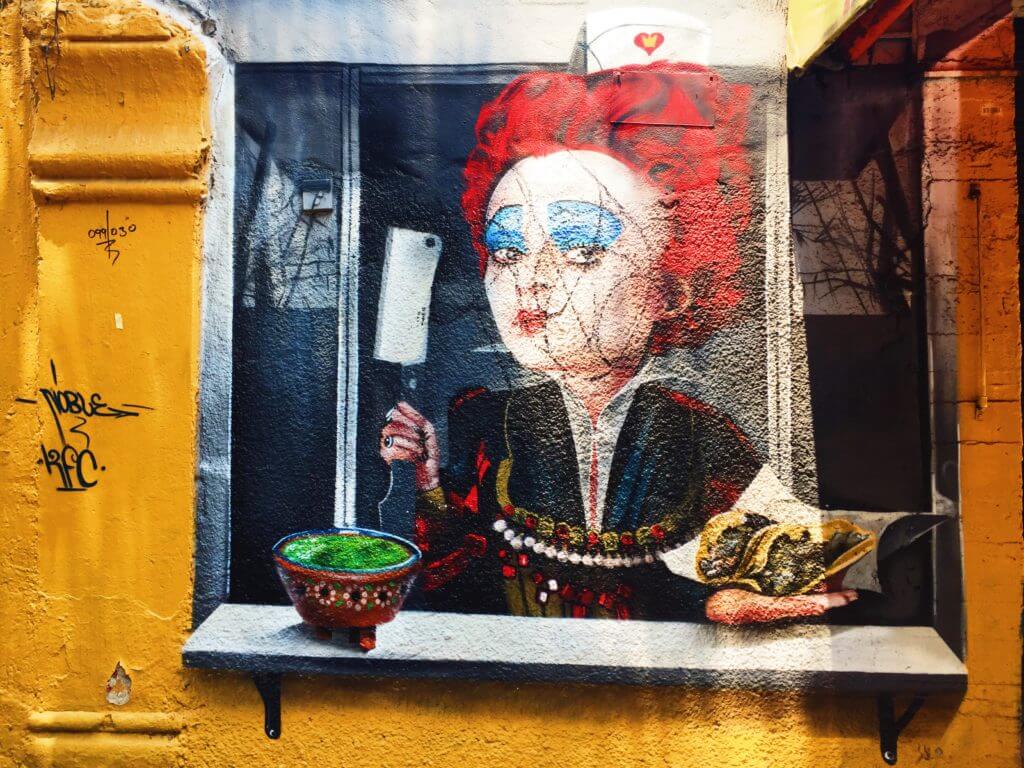 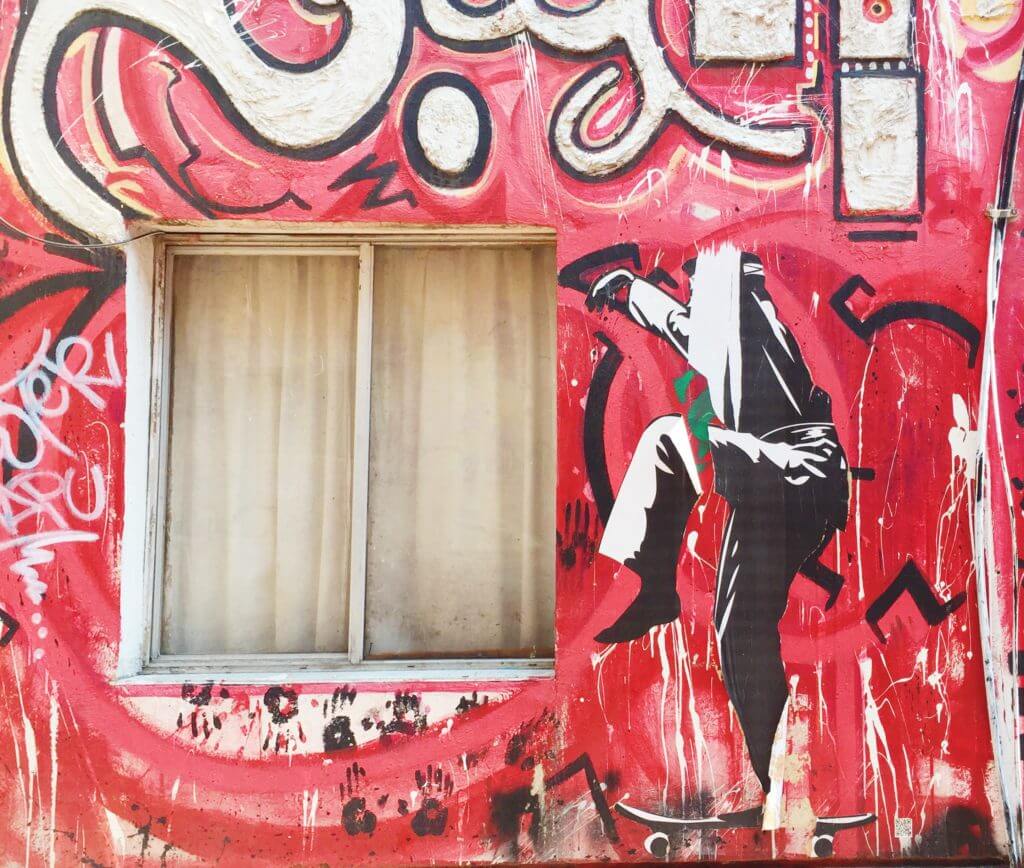 Another way to find street art in La Roma is to book a tour. I haven’t personally been on a Mexico City street art tour myself, but I’ve heard good things about them and I’m planning to go on one soon. One of the street art tours I found during my research was the Street Art Chilango tour. This tour takes you through the La Roma and Condesa neighborhoods. It has great reviews. The tours are run by local street artists who work with businesses in the city in order to be able to create more street art.

A few years ago I wrote a blog post about the beautiful street art in La Romita, an area inside Mexico City. 🌞 I went there again the other day and was happy to find this piece again but the majority of murals have actually been painted over. 😢 I think it’s because the paint on the buildings was fading a bit so they had to repaint them but I can only speculate. Hopefully the artists can get back there soon to make some new art but even if they don’t, it’s still a very beautiful area to get lost in. ✨ 📷 Mexico City 🇲🇽 📍Náhuatl & Mexihcah Land 2019 #justleavingfootprints #mexicocitystreetart #laromita

A post shared by APRIL🌎JUSTLEAVINGFOOTPRINTS (@aprilveralynn) on Mar 19, 2019 at 8:17am PDT 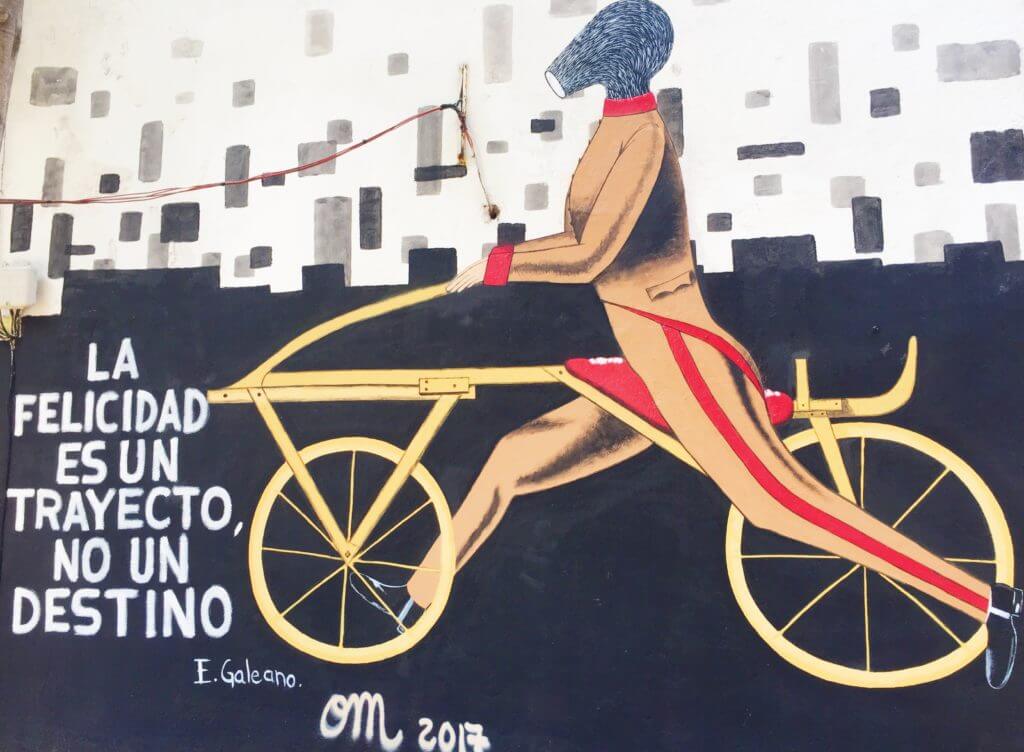 “Happiness is a Journey, not a Destination.” 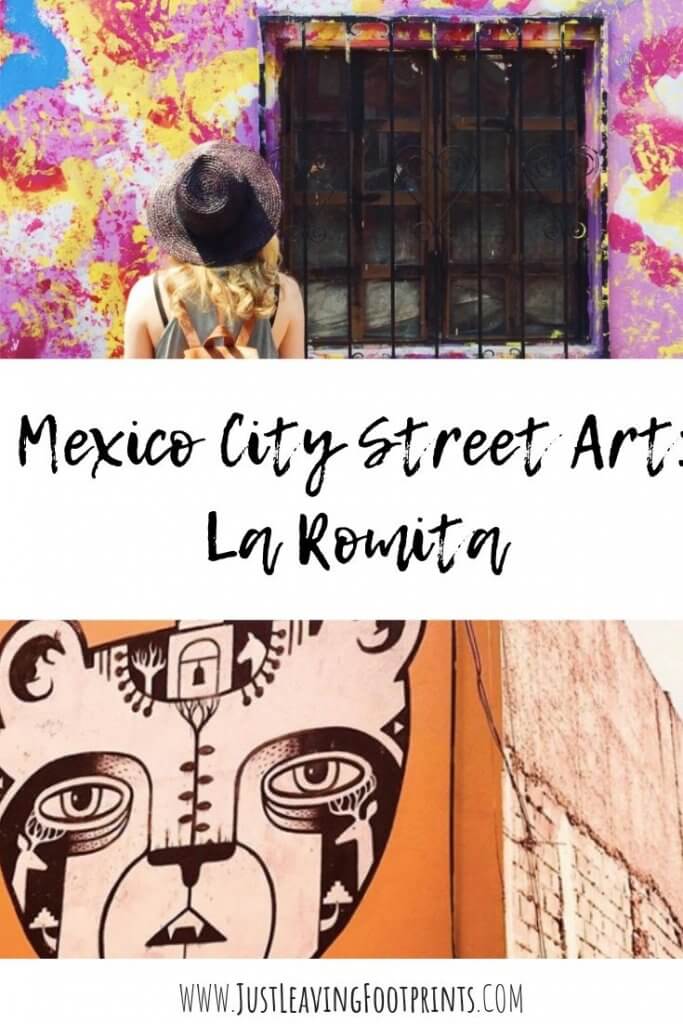 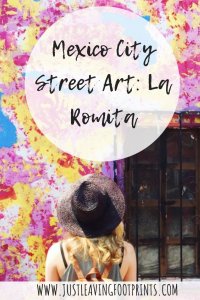 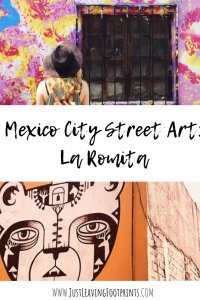 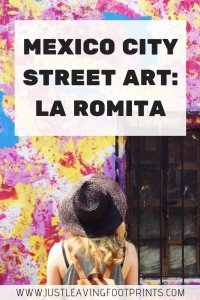 Author: April Thompson
Filed Under: Mexico
Visiting Teotihuacán: Everything You Need to Know About the Pyramids
Volunteering in Mexico: My Experience Working With Niños Palabra