Aura: The Vegan Cooking Class in Mexico City You Need to Try 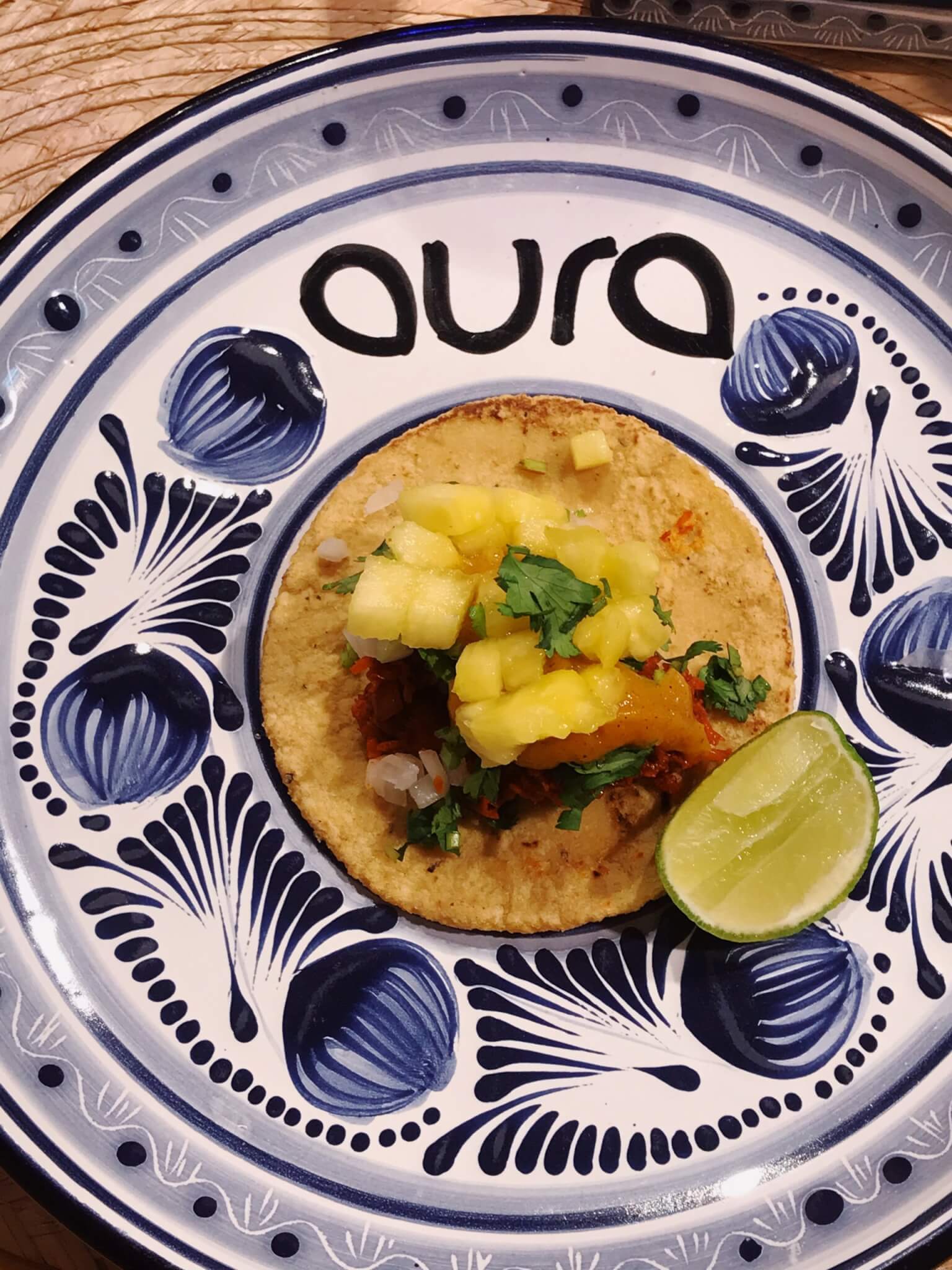 If you’re vegan or vegetarian and are planning on visiting Mexico City then you’re in luck! Mexico City has a thriving and growing vegan food scene. There are tons of good vegan restaurants to choose from including delicious street food stands. Some of the best food I’ve had here was at the Vegan Cooking Class in Mexico City that I went to the other day. It was a super fun class hosted by Aura Mexican Cooking. Here’s some information about the class that will make you want to try it for yourself!

This post was hosted and sponsored by Aura Mexican Cooking, however, all opinions are my own and I only work with brands and companies that I truly believe in. This post also contains affiliate links. Should you decide to purchase something from one of my affiliates I will receive a small commission at no extra cost to you. Check out my Disclaimer for more info.

What is Aura Mexican Cooking?

Aura Mexican Cooking is a beautiful place in Mexico City that offers cooking classes and workshops infused with rich history and bright flavors. It’s a local family-owned and women-owned business too!

Aura Mexican Cooking was started by Chef Graciela Montaño who brought her family together to create amazing cooking classes and experiences for people in Mexico City. Originally the classes took place in Graciela’s home, but a few years ago, they moved to their own location in Roma Norte.

The Location and Atmosphere are Everything! 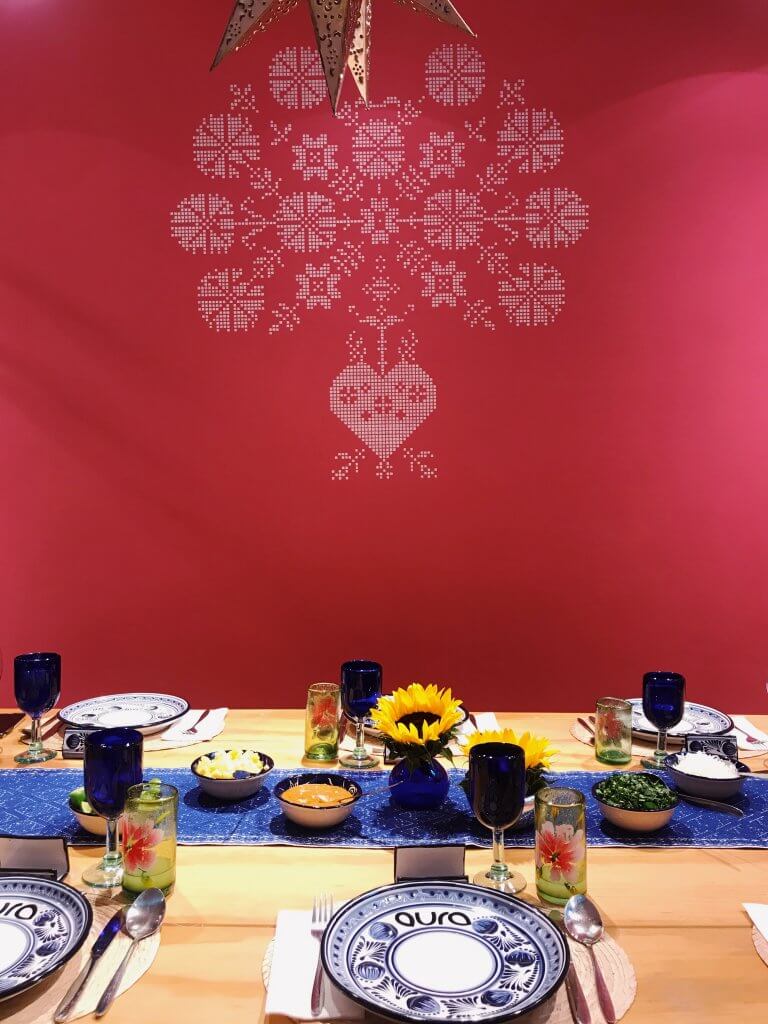 Not only are the cooking classes incredible, but so is the location. It’s right near a local market, tortillería and street food stands that you can visit if you join one of the morning classes. The interior of the space is also absolutely gorgeous. There are two large kitchens, one downstairs and one upstairs. The walls are painted bright pink and traditional bold blue and white dishes are set neatly on the tables. The upstairs area has a small open patio and the atmosphere is warm and inviting.

Aura has received both the Traveler and Hospitality Award as well as the Global Quality Award. Chef Graciela has also studied as a sommelier and she hosts a weekly TV cooking show called ‘Tu Cocina’ on Canal Once (Channel 11). The two other women who helped start Aura are Lorena and Krystel. Lorena spent several years in the hospitality industry and now teaches cooking at Aura. Krystel also teaches cooking at Aura and used to manage a bakery.

Book a Vegan Cooking Class with Aura by clicking here!

The Difference Between the Morning Class and the Afternoon Class

Both classes start off with a welcome drink of fresh fruit juice as soon as everyone arrives. Mexico is known for its fruit juices and ‘agua frescas’ so after living here for two years I’ve tasted quite a few of them. Even after living here for so long I can honestly say that the guayaba water that I drank at Aura was the best fruit water I’ve had in Mexico. The only difference between the morning and afternoon classes is that the morning one starts off with a market tour.

Start Off Your Experience with the Morning Market Tour

The Vegan Cooking Class that I joined was in the morning so I got to go on the market tour! Chef Graciela started off by taking us to a Tortillería that has been in business for over 60 years. We got to learn about how tortillas are made. We also learned about how tortilla-making differs from central and southern Mexico as compared to northern Mexico.

Next, Chef Graciela took us to the Mercado de Medellin. Here she showed us some of her favorite places to buy fruits, veggies, chilies and more. It was clear that she knew her way around because she was talking to most of the shop owners by using their names. At one stop, we were able to try fresh cacao nibs and at another, we tried mamey fruit. It was all so tasty!

Not only did we get to taste various things in the market, but Chef Graciela also explained to us so much about the history of Mexican food. We learned about what ingredients were already in Mexico before colonization, and what ingredients the Spanish brought with them. We also learned about Philipino, Arabic and other cultural influences within Mexican cuisine. She also taught us about how chilies have completely different flavors and names when they are fresh versus when they are dried.

What Will I Learn to Cook in the Class?

Once you come back from the market tour you will begin cooking! The Vegan Cooking Class features a delicious 4-course menu. You will also receive a taste of mezcal along with a glass of wine or beer and as much fresh fruit juice as you can drink. 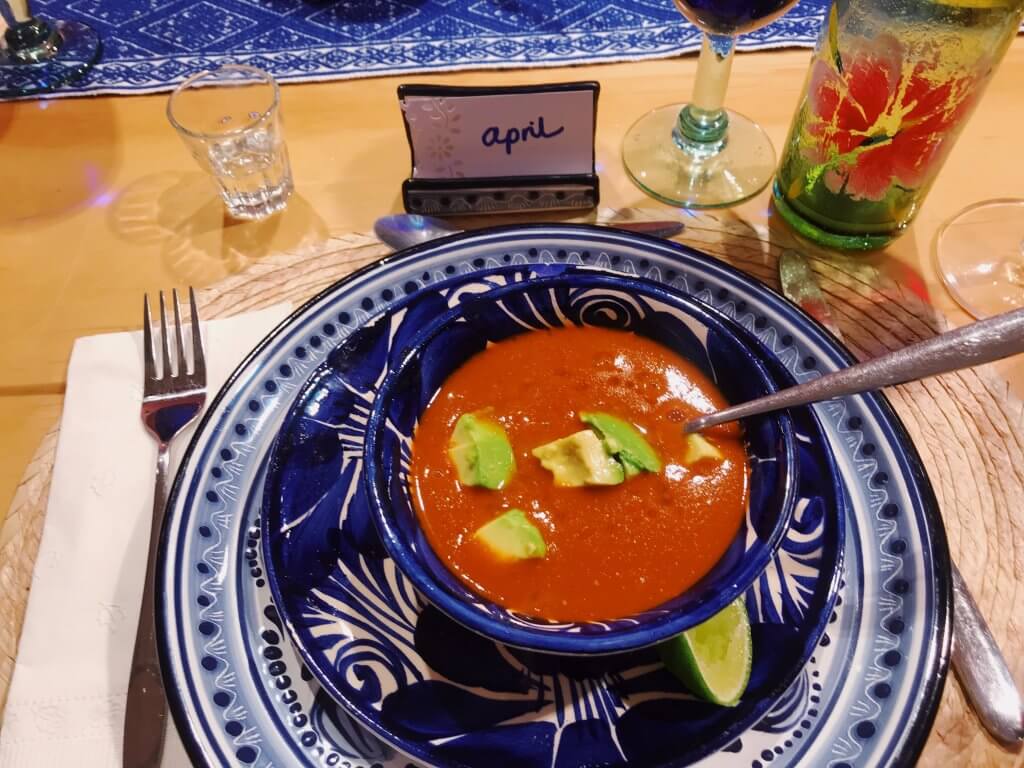 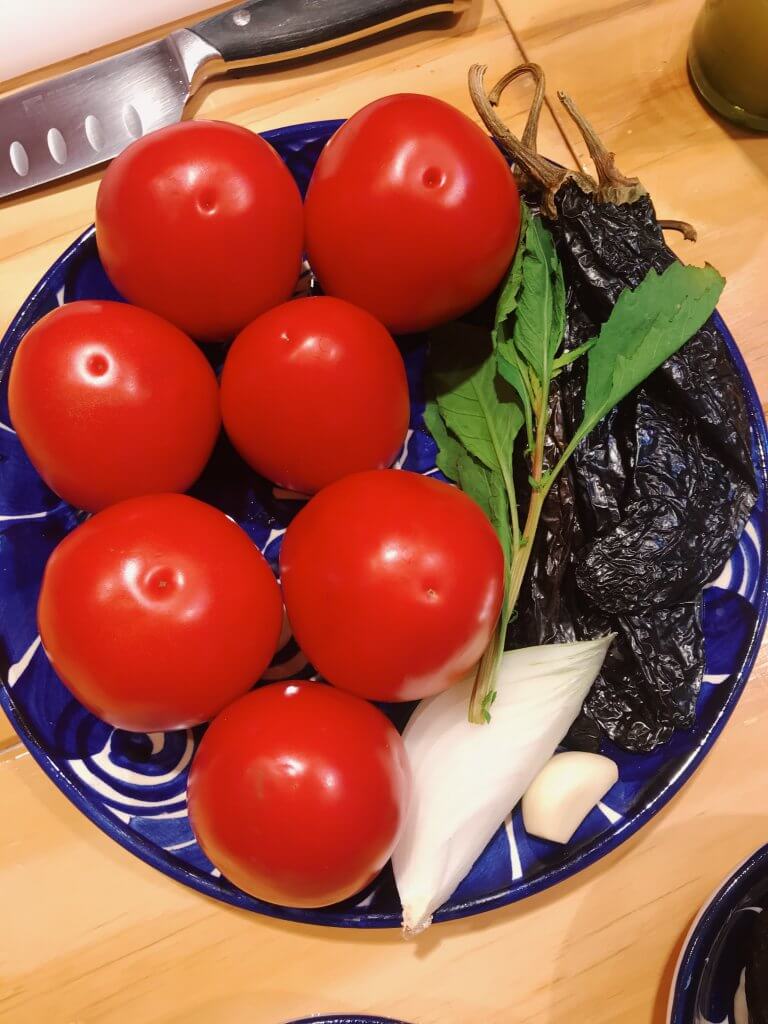 The first thing we learned how to make was tortilla soup. Tortilla soup is a traditional Mexican dish that is made of a spiced tomato broth or soup, with tortilla chips, avocado, and other toppings added. Instead of just making a broth and adding the tortilla chips as a topping, Chef Graciela had us cook and then blend the tortilla chips right into the soup. This created a much thicker and creamier texture in the soup than broth. I’ve tasted a lot of tortilla soup in Mexico and this one was so delicious! It was definitely a bit spicier than some of the ones I’ve had and it tasted so fresh. 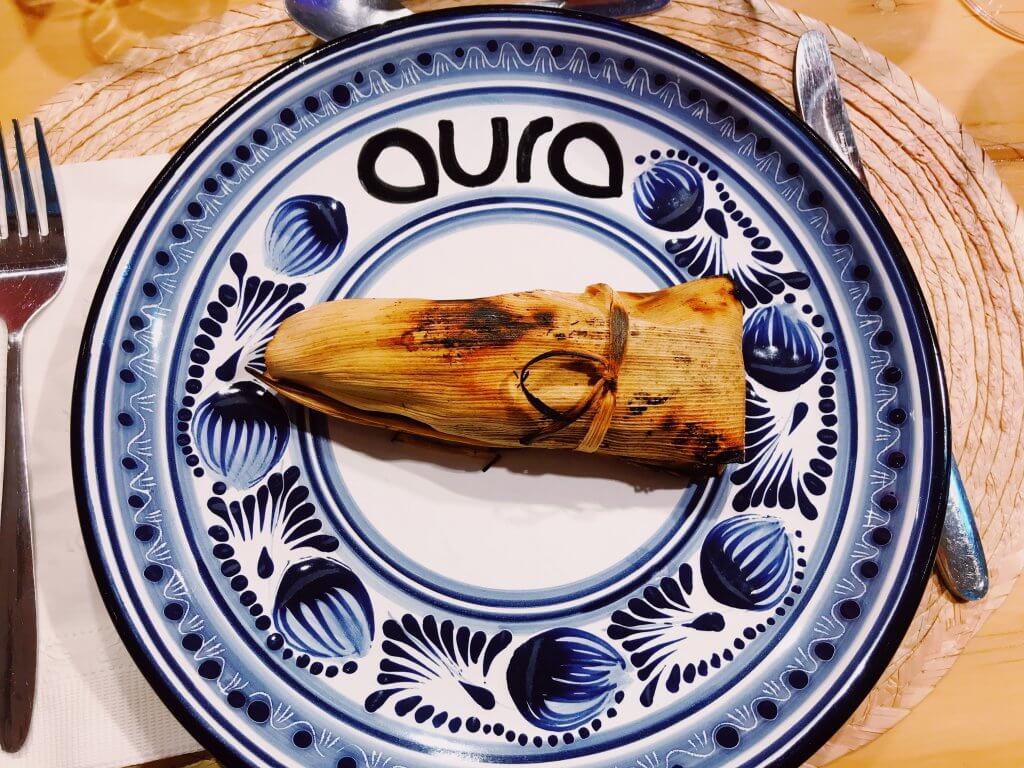 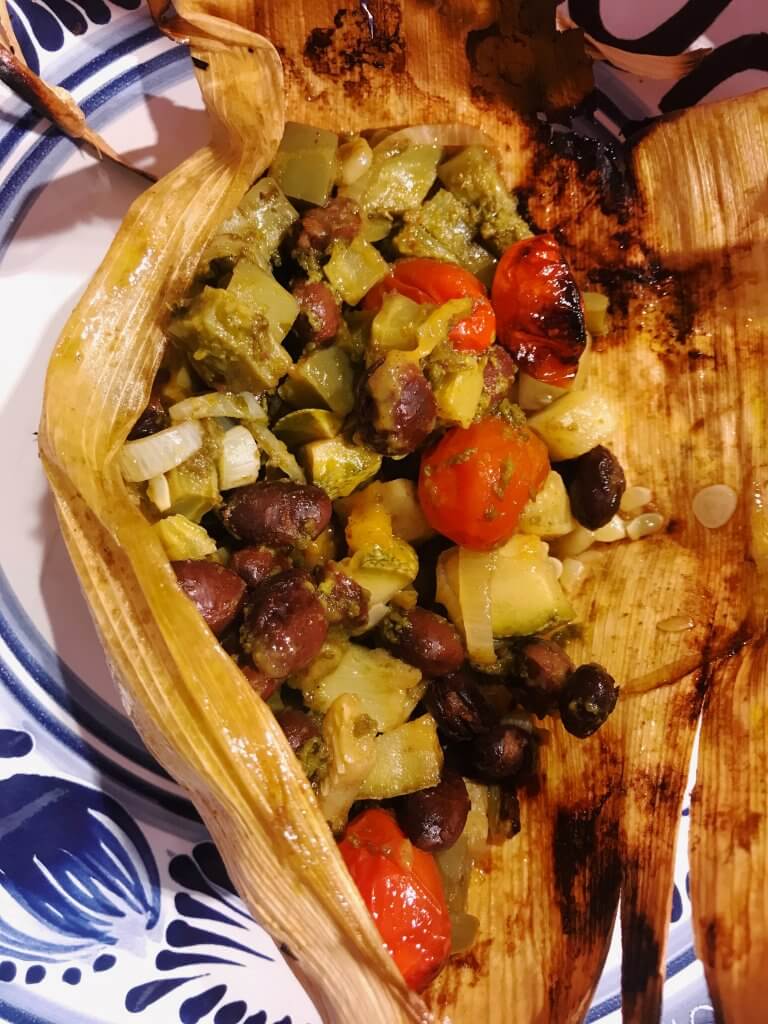 Before this class, I didn’t know what a Mextlapique was. Mextlapiques are a pre-Hispanic kind of tamal that are made without corn masa (corn dough). Chef Graciela taught us how to prepare the corn husks, fill them with veggies, wrap them and tie them up without letting any ingredients spill out. We also got to make a delicious spiced spearmint sauce. I never would have thought to put a spearmint sauce on top of veggies the way we did and the result was so tasty! 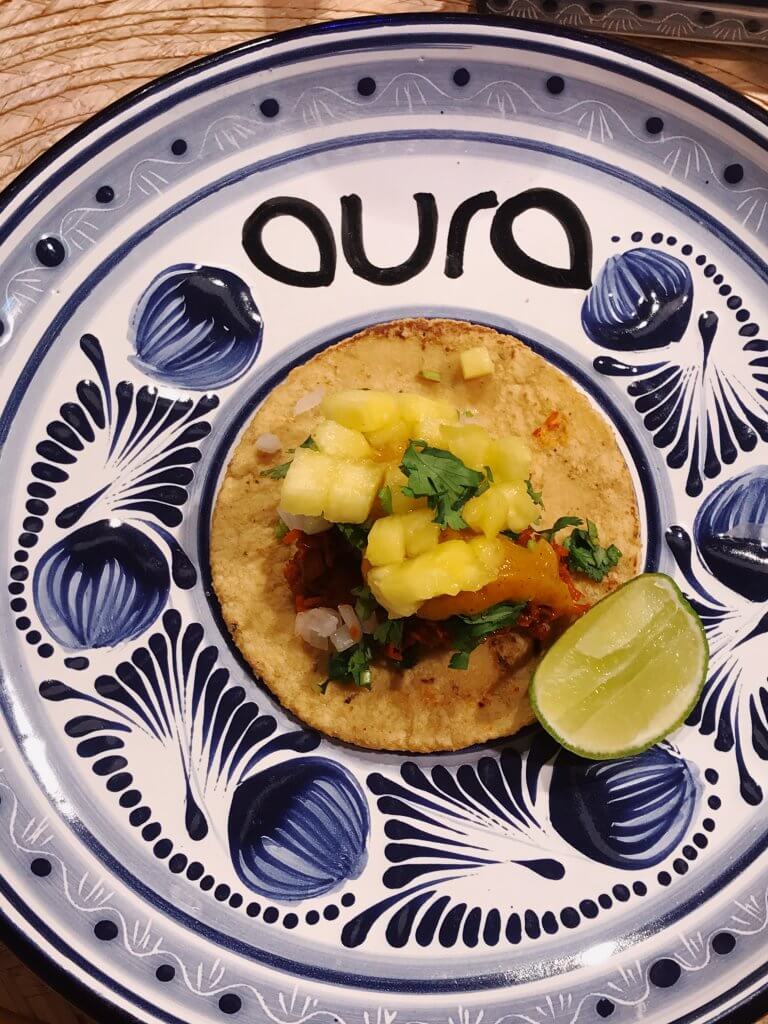 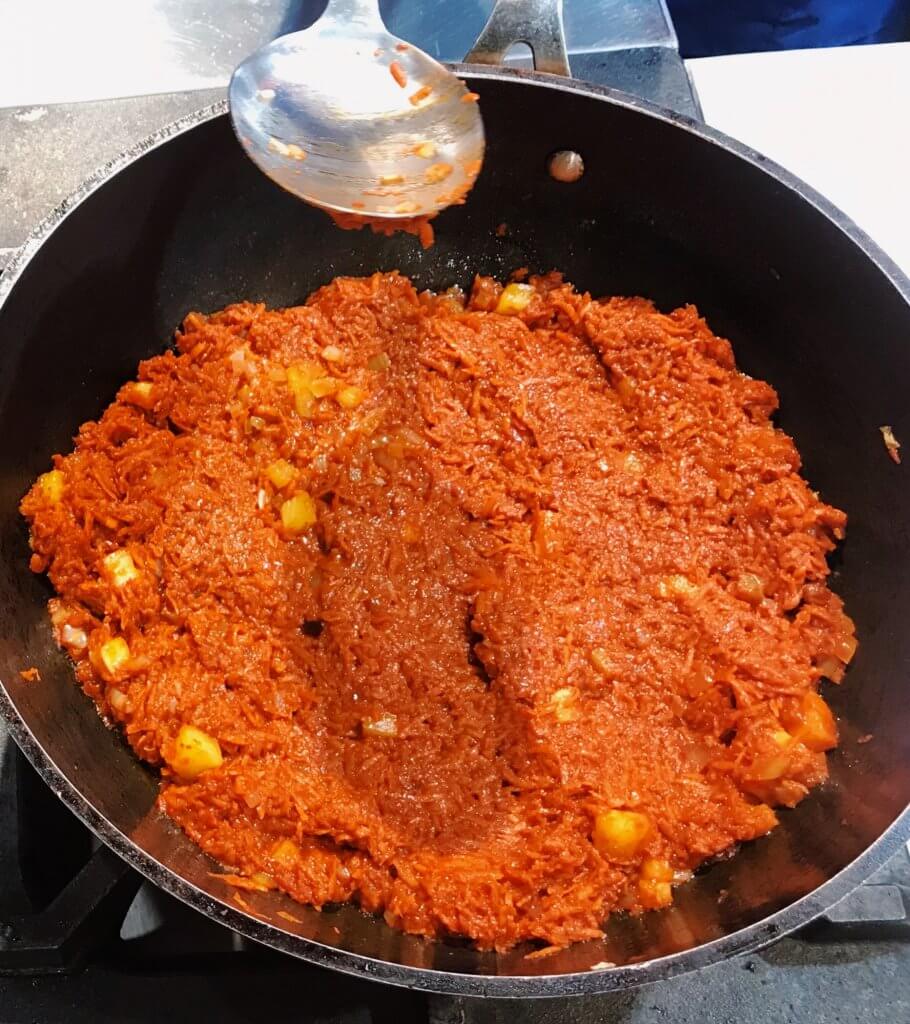 Typically, tacos al pastor are made of pork and are based on the lamb shwarma which was introduced to Mexico by Lebanese immigrants. This famous type of taco features ingredients native to Mexico as well as Middle Eastern spices. Normally when you order vegan tacos in Mexico, you will receive tacos with ingredients such as mushrooms, nopales (cactus) or breaded cauliflower. Usually, whenever I order vegan tacos al pastor, they’re made with mushrooms. However, for the tacos al pastor, we made in class, we actually mixed a variety of chilies and spices with shredded carrots. This became a delicious and healthy alternative to using meat. We also learned how to make a mango and chili manzano salsa which was delightfully sweet and spicy. We topped the tacos al pastor with the chili manzano salsa, cilantro, onions, and pineapple.

When I first heard that we would be using avocado to make a dessert I was intrigued but skeptical. I had heard of avocados being used in milkshakes and other sweet desserts in Asia and I thought it sounded a bit weird. Boy, was I wrong! I ended up asking for second helpings of the avocado coconut mousse that we made! It was so yummy! We topped our mousses with shaved almonds and fresh cacao nibs and it was perfection in a bowl. Definitely don’t knock it until you’ve tried it, even if you’re skeptical!

Why Should I Choose THIS Particular Vegan Cooking Class in Mexico City?

Aura Mexican Cooking’s Vegan Cooking Class stands apart from other cooking classes in the city. Not only is it vegan, but Aura is a local family-owned and women-owned business! Chef Graciela knows her stuff. She has her own TV show and her employees have managed bakeries and worked for years in hospitality. You will not only learn how to make excellent food and take home recipes that you can use for years to come. You will also learn about the cultural history behind Mexican foods, as well as how to properly handle and cook each ingredient.

Book a Vegan Cooking Class with Aura by clicking here! 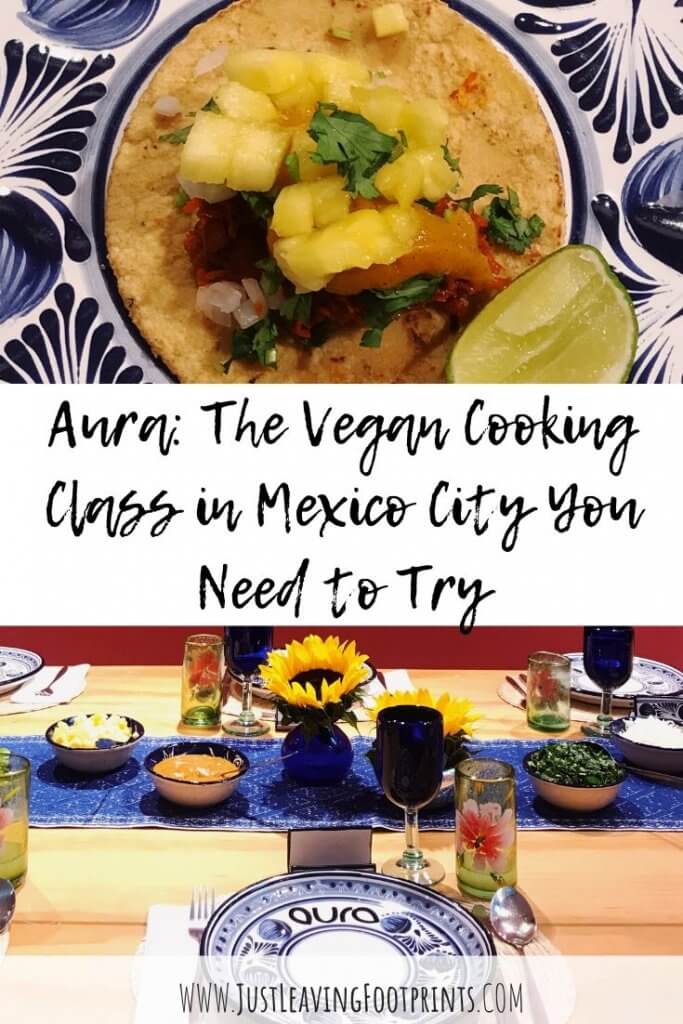 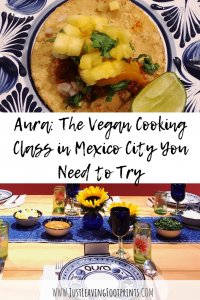 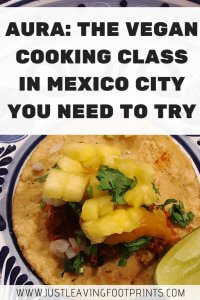