Xochimilco Mexico City: The Best Things to Do in Xochimilco 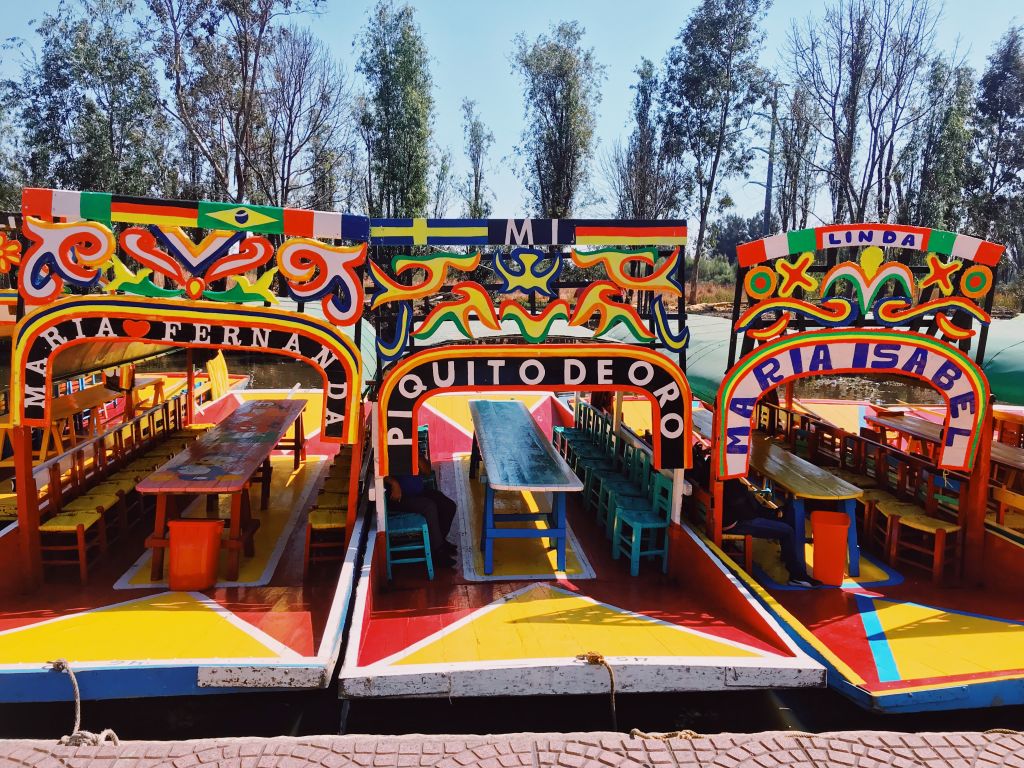 Xochimilco is an area in Mexico City that is famous for its river canals and colorful trajineras (boats). Riding the trajineras is something I love doing but there are also lots of other things to see and do in the area. I’ve been to Xochimilco around ten different times now, maybe more, so I’m very familiar with the area. If you’re planning a trip to Mexico’s capital, here’s what not to miss in Xochimilco Mexico City.

Xochimilco is an area located within the south of Mexico City. The easiest way to get there is by Uber since it’s located pretty far from most central areas of the city. Xochimilco is basically the ‘Venice’ of Mexico City. It’s most famous for its canals and man-made islands called chinampas but its also known for so much more than that too.

What to Do in Xochimilco Mexico City: Ride the Trajineras

It usually costs about $500 pesos for an hour-long ride on the trajineras. The best way to save some money when you go is to get a big group to go together so you can split the cost more ways and save some money. While riding the big trajineras, you will see smaller boats floating by with vendors selling blankets and souvenirs. You will also be able to buy food from some vendors, such as tacos, along with soda or alcohol. The other kind of boat you’ll see will be other trajineras filled with mariachi bands. The mariachis will attach their trajinera to yours for a small fee and serenade you and your group with traditional Mexican music.

You can choose to have your trajinera stop at one of the greenhouses to see and purchase a variety of plants. These greenhouses even have baby venus fly traps! At some of the greenhouses, you can also pay a small fee to see axolotls that are native to the area. Axolotls are known as Mexican walking fish because they look like fish but they have legs. However, they are really a kind of underwater salamander.

Make a Stop at the Haunted Island of Dolls 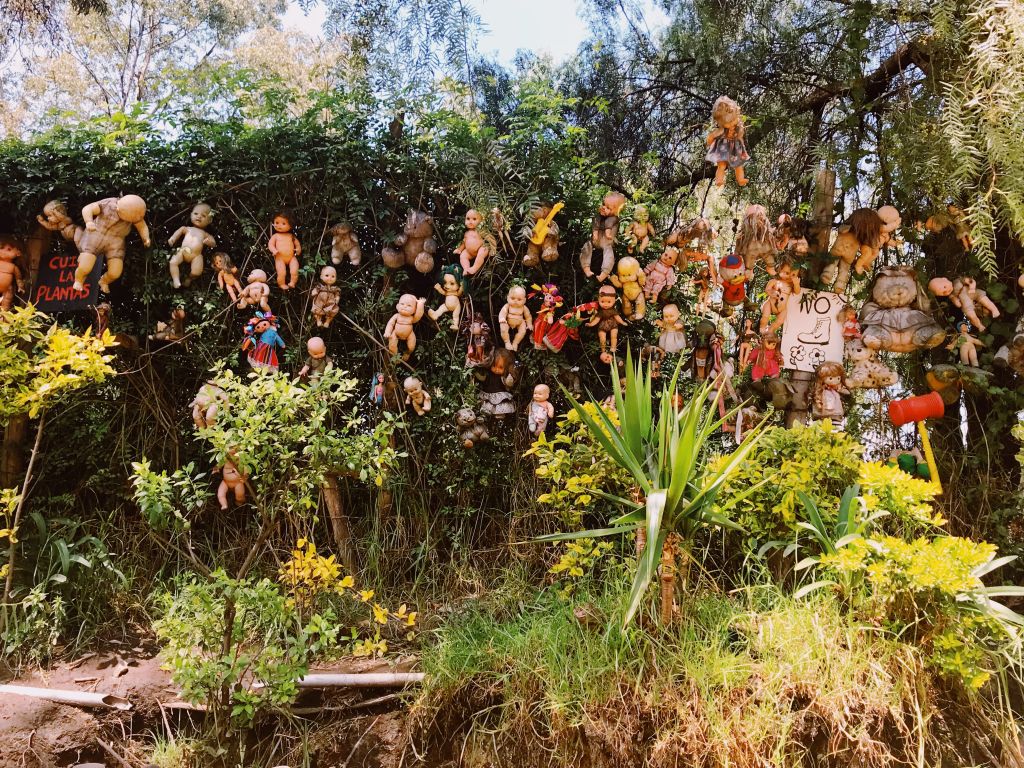 If you’re into creepy things, then definitely make sure your trajinera can take you to the Haunted Island of Dolls. You will likely need to book a tour that is two-three hours long, depending on what embarcadero (port) you start from. So make sure you ask your guide how long it takes to get to the Haunted Island of Dolls, and then ask how much it will cost for your group to go.

There are a few different versions of the legend of this island. One version states that a man who came to live on the island found a dead girl hanging from a tree. The other says he found her body drowned in the river. Either way, the legend goes that after he found her body, her spirit began to haunt him. So, to appease her spirit, he hung old dolls from the trees on the island. If you choose to visit the island now, you can actually get off your boat and walk around to see the dolls for yourself. 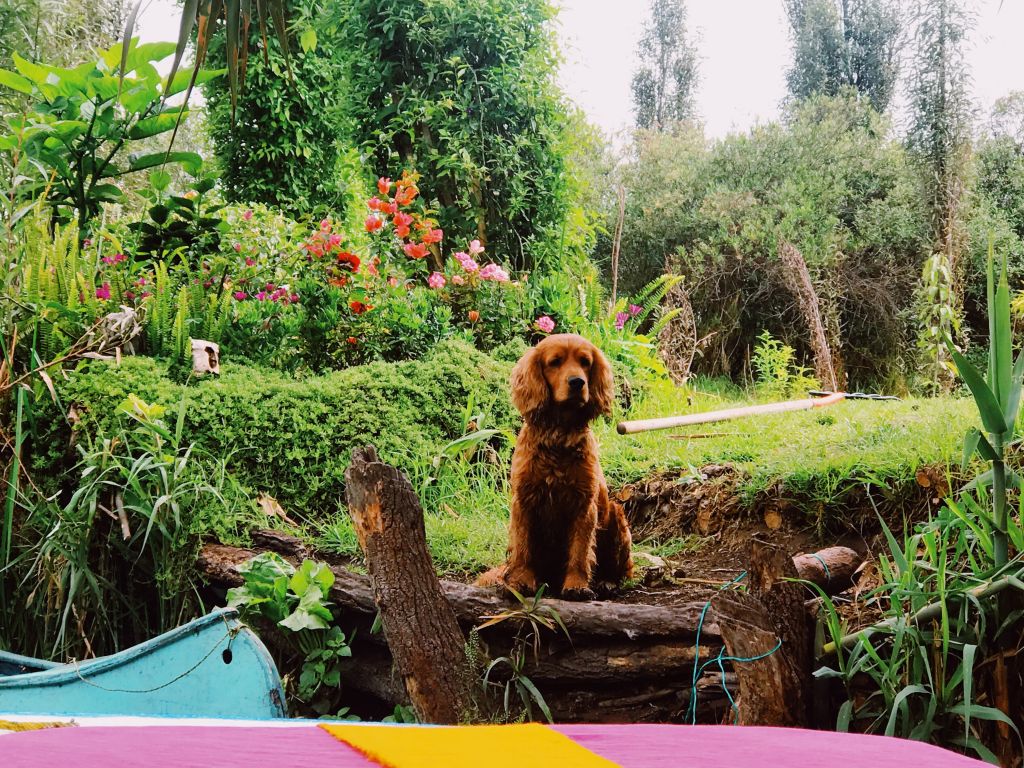 One of the best things I’ve ever done was to go on an eco-agricultural tour via trajinera with a tour group called De La Chinampa. My friend Molly invited me and I ended up bringing my mother in law along as well. This tour group is so amazing and so environmentally focused that it ended up leaving a lasting impression on me.

De La Chinampa aims to bring travelers to see the chinampas (man-made islands) of Xochimilco and teaches them about their history. We learned that these islands used to be mainly used for organic farming before the city expanded so much. They actually used to be the main source of food for the whole city! We also learned that when Mexico City sinks (it was built on old lakebeds so it’s constantly sinking), it actually pushes mud up into the canals of Xochimilco. This mud is then picked up off the river floor, and placed on top of the chinampas. The mud contains volcanic soil and is very fertile.

De La Chinampa takes its visitors to a chinampa to see how the group is trying to bring back traditional farming methods. We learned that the group’s island is actually rentable. This means that if you have a restaurant or even just want fresh veggies for your family, you can rent a plot of land on their chinampa. For a really good price, the caretakers of the chinampa will plant whatever veggies you want to grow and call you to come harvest them when they’re fully grown. The chinampa owned by De La Chinampa has rows and rows of beautifully fresh veggies. They also have a bee-friendly garden filled with flowers to attract the earth’s most important pollinators. The island was also full of little butterflies.

At the end of the tour, we got to eat! Everything we ate was fresh from the chinampa. All the flavors were so much more vibrant because of the organic farming methods used. We ate fresh guacamole, tamales stuffed with fresh mushrooms, and we even got to try some fresh cheese. One of the neighboring chinampas has cows and uses them to make organic cheese.

Attend the La Llorona Show in October or Early November 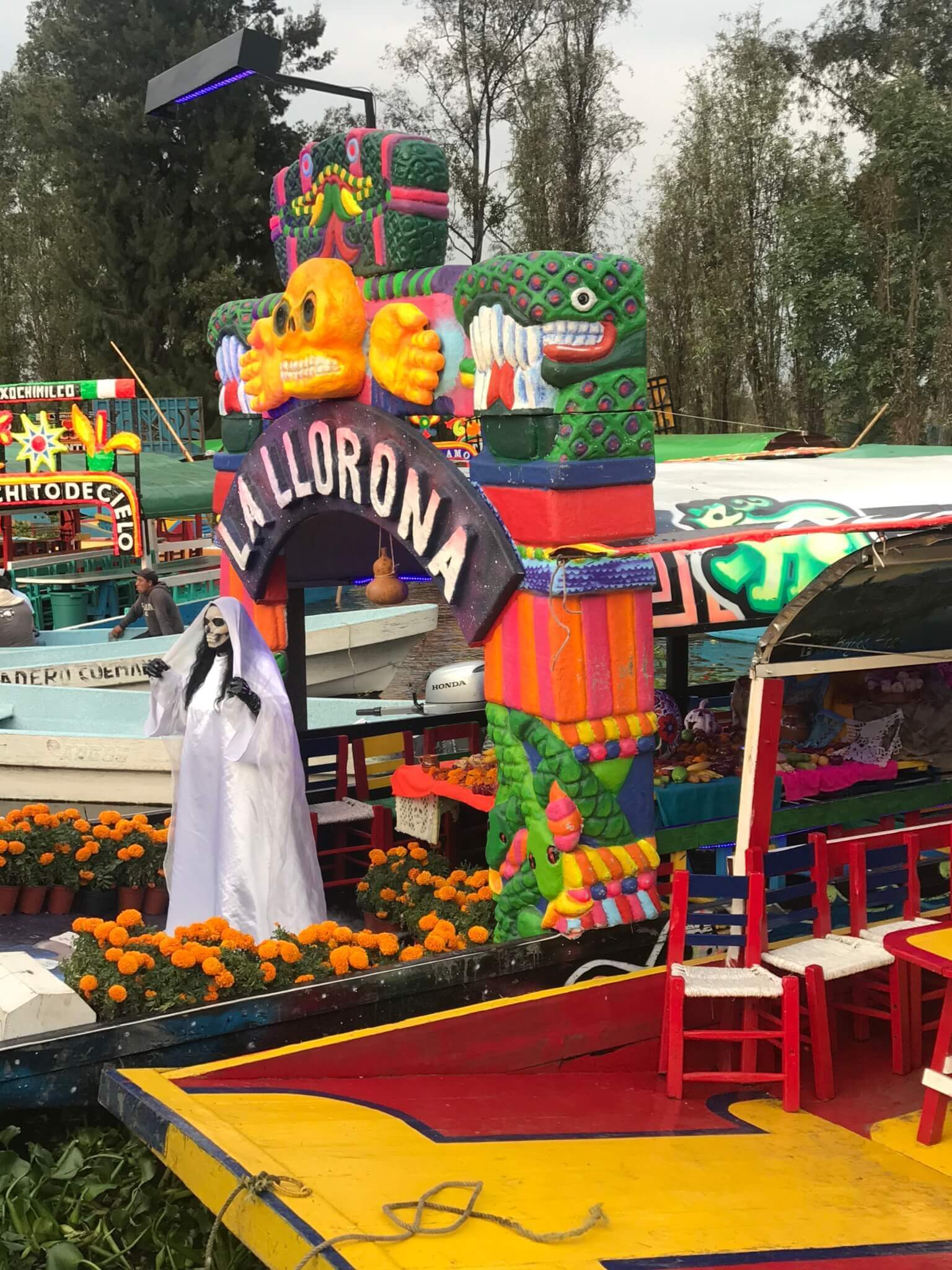 One last thing to do on the trajineras is to attend the La Llorona Show in October or early November. This show only happens in these months because it’s a spooky thing to do. It’s a really fun thing to do for Day of the Dead but I would recommend visiting on a different weekend in October, so you can beat the crowds. I went with my husband and some friends to see La Llorona last year. We chose to go the weekend before Day of the Dead and it was still super crowded! For that reason, it might be best to go in early October if you can.

So what is La Llorona? La Llorona is another spooky legend that has been made into a hauntingly beautiful show. Again there are various versions of the legend. The one that plays in the show, shows an indigenous woman who’s pregnant and has to say goodbye to her brother who leaves to confront the Spanish. According to legend, her brother doesn’t return until she has had two babies. When he comes back he is followed by the Spanish and murdered in front of her. In desperation and grief, she drowns herself and her two children while asking the gods to protect the rest of her people from harm. Then her spirit awakens in the form of a ghostly figure dressed all in white. She looks around and can’t find her children anywhere so she floats above the waters of Xochimilco crying for them. This is why ‘La Llorona’ literally means ‘The Weeping Woman’ in English.

The showing of this legend at Xochimilco is truly spectacular. Make sure you get your tickets in advance and show up early to the correct Embarcadero (Port). You will then trade your ticket for a seat on a trajinera at dusk, which will take you to a small island. All the colorful trajineras will line up around the island where the show takes place. You will see acting, dancing, incredible costumes and hear beautiful songs.

You can read more and buy tickets for the La Llorona Show in Xochimilco Mexico City here.

What to Do in Xochimilco Mexico City: Visit the Nearby Museo de Dolores Olmedo 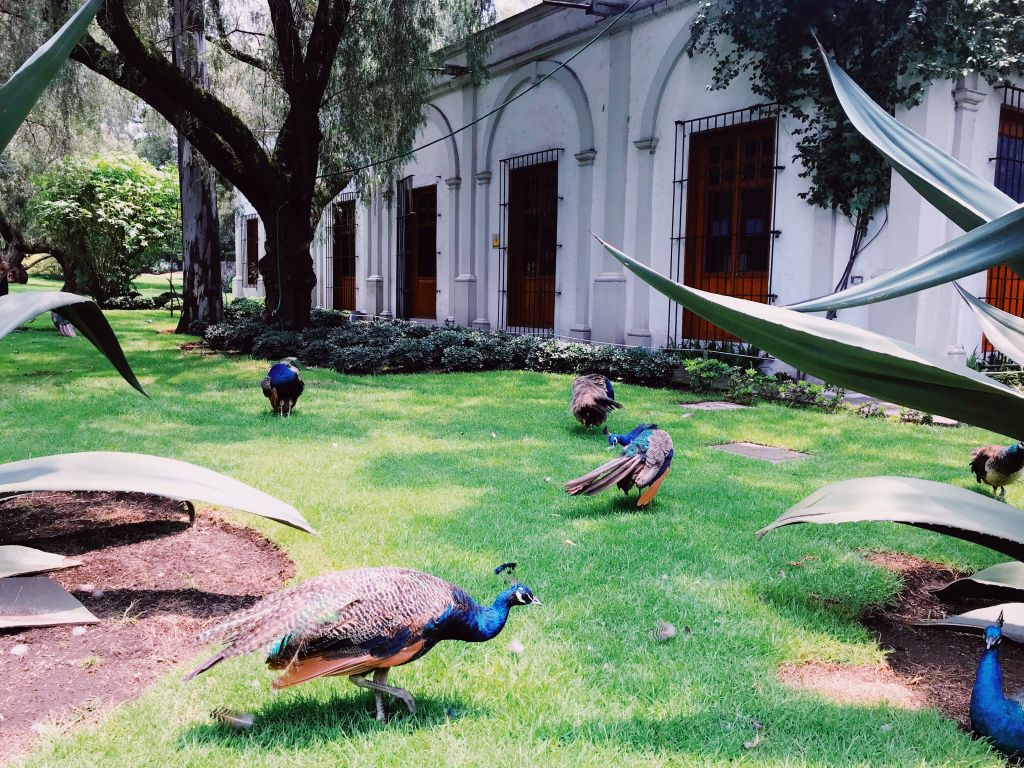 The Dolores Olmedo Museum is often overlooked by many travelers since it is so far away from the city center. However, if you’re already planning on riding the trajineras in Xochimilco, you might as well visit. Dolores Olmedo was a friend of both Diego Rivera and Frida Kahlo. Her collection of artwork includes a great variety of pieces by both of them, as well as by other artists. Dolores was actually one of Diego’s mistresses at one point too.

This museum isn’t only worth a visit due to what’s inside it. Outside the museum, the courtyards and gardens are perfect for relaxing and wandering about. The gardens are home to peacocks including some albino ones as well as the famous Xoloitzcuintle dogs. These are also known as Mexican hairless dogs and both Frida and Diego used to raise them.

It’s easiest to get to this market if you ride the trajineras at the Embarcadero de Cuemanco (one of the many ports you can take the colorful boats from). The Mercado de Plantas y Flores de Cuemanco is a large market filled with plants and flowers. It’s a beautiful place to wander around in. You can even buy a plant or gift for your Airbnb host (or yourself if you live in Mexico) while you’re there. 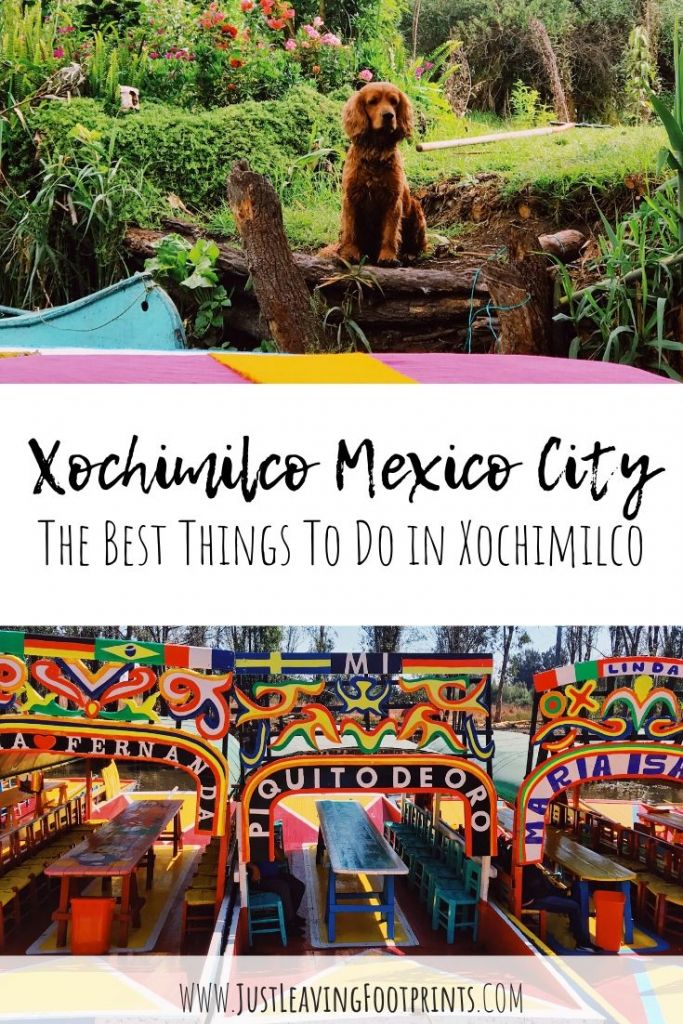 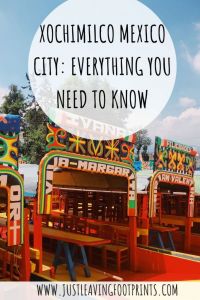 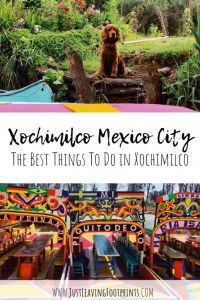 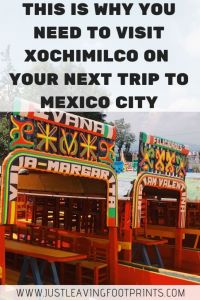